If you remember that old song ‘Nani teri morni ko mor le gaye’, you might have a fair idea of who I am. Yes, you guessed it right! I am a peacock and I am also known as an Indian peafowl. However, I have another name, which is normally used by scientists, Pavo Muticus. 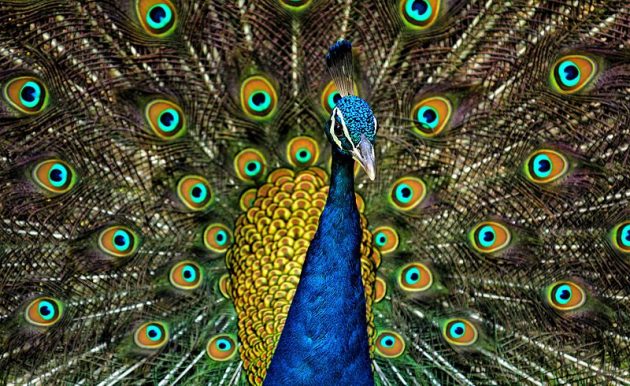 While we are collectively called peafowls, the males in our tribe are called peacocks while the females are called peahen. A young peafowl is called a peachick.

We are normally 190 cm to 225 cm in length and can weigh around 5 kg. Us peacocks are known all around the world for our beauty and our feathers can be as long as six feet. In contrast to most animal species, in our tribe peacocks are more beautiful in appearance than peahens. Moreover, a peacock’s body comprises around 200 feathers.

Our skins are iridescent blue in color, alternated by shades of green. We have a set of small feathers at the top of our heads and brown feet.

We can’t fly too high and normally stay on grounds. We live in forests and terrains and hunt small worms and insects, though you might have seen us eating grains in zoos and wildlife parks.

While I live in India, many of brothers and sisters can be found in nations like Cambodia, Vietnam, Nepal, Bhutan, Myanmar, Bangladesh and Sri Lanka.

You may have seen me in wildlife sanctuaries and zoos, prancing around with my feathers spread out. I have a beautiful set of feathers that I spread out every time it rains. No prizes for guessing, which is my favorite season, the monsoon of course!

I get excited every time dark clouds take over the sky and then as soon as the raindrops drench the earth, I spread out my feathers and start dancing. It’s a sight to watch out for and people often come from far and wide to get a glimpse of my dancing.

If you too want to see me dancing you can come to wildlife sanctuaries like the Kanha National Park in Madhya Pradesh, Bankapura Wildlife Park in Karnataka and, the Sariska Tiger Reserve and Ranthambhore National Park in Rajasthan

As per Indian mythology, I am associated with a number of gods and goddesses. I am associated with Goddess Lakshmi, who is also the goddess of wealth. This is why you might find your parents keeping my feathers next to an idol of the goddess. Moreover, Lord Krishna always wore a peacock feather in his crown and peacocks used to dance to the melodious tunes of his flute. Lastly, Lord Kartikeya used a peacock as a mode of conveyance.

Another fun fact about us is that we are fairly intelligent animals. We use our voices to attract females to ourselves.

While I am having a peaceful life in India, many of family members are on the brink of extinction due to mindless human activities. From poaching to loss of habitats, humans have selfishly sacrificed many animals for the sake of their interests.

Peacock feathers and body parts are illegally exported to various Asian countries. As per a study conducted by an organization affiliated with the World Wildlife Fund in 2017, peacock feathers and body parts are used for various medicines prescribed by Ayurveda, Siddha, and Unani medicine systems. The practice of prescribing such medicines thrives in states like Tamil Nadu, Rajasthan, Gujarat and New Delhi.

As per the International Union for Conservation of Animals’ Red List, peacocks in India are in the ‘Least Concern’ category. However, peacocks in Cambodia are not as lucky. The famous Cambodian green peafowl is now an endangered species. Once commonly spotted across the country, the green peafowl is now limited to the plains in northern and eastern parts of Cambodia.

You might be young, but there’s a lot you can do to.

Help my family members escape extinction and create a bright future for us. To start with, you can help us by spreading awareness about the endangered status of peacocks in other countries. In addition, you can also help in spreading awareness among people to not use medicines made using peafowl feathers or our body parts.