You might have spotted me lurking around in forests, often alone, with a horn on my nose and because of my size, I’m hard to miss. Yes, you guessed it right, I am an Indian rhinoceros. Most people call me a rhinoceros but there are others who fondly refer to me as a rhino. Then there are those serious looking guys, working in labs and wearing glasses called scientists, who refer to me as Rhinoceros unicornis. A fun fact about my scientific name is that it is made up of two Greek words—‘Rhino’ which means a nose and ‘keros’ which means the nose of an animal. 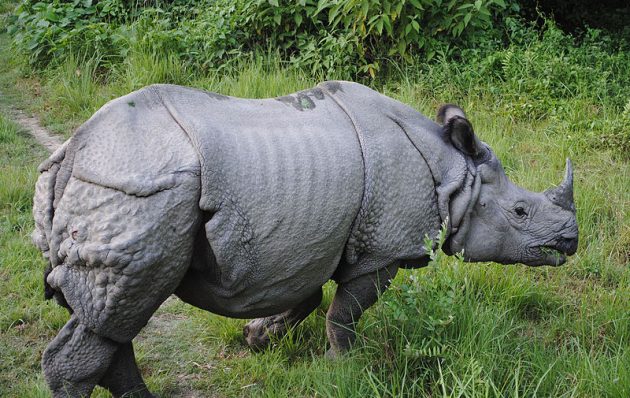 While we have been around for generations, we were first described in detail by Carl Linnaeus in 1758. There are 11 species of rhinoceros and five sub-species, viz. White rhinoceros, Black rhinoceros, Indian rhinoceros, Javan rhinoceros and the Sumatran rhinoceros. Also, some of us have one horn and other species have two horns. The ones seen in India are also referred to as the Greater Indian one-horned Rhinoceros and can weigh up to as much as an SUV.

We have evolved a lot over the years. Legend has it that we belong to the genus Rhinocerotidae and diverged from the Perissodactyls during the Paleogene period about 54 million years ago.

The  Perissodactyls were basically odd-toed ungulates.  What many of you don’t know is that a separate genus Equidae has similar characteristics to the Perissodactyls. Animals belonging to the Equidae genus include horses and donkeys, which is why some scientists also claim that my ancestors looked like horses once upon a time. Asian discovered the fossils of the Indian and Java rhinoceros, who are the only sub-species of the genus Rhinotermitidae, first around 1.6-3.3 million years ago.

We have a very rough skin which helps us survive in the tough weather conditions and rugged terrain like forests. Our skin is grey and brown in colour with pink-coloured folds and one black horn. We have wart-like structures on our skin and have very little hair growth on our bodies. An average one-horned rhinoceros can weigh up to 2.2 tonnes and have a height of up to 6 feet and a length of up to 12.5 ft. We are mammals and are herbivores.

We are mainly found along the basins of Indus, Ganga and Brahmaputra rivers in the Indian sub-continent. There was a time when we used to roam freely across the Indo-Gangetic plain. However, due to rapid urbanization, my family and I had to shift base and are currently limited to the Tarai grasslands of southern Nepal.  Moreover, due to problems like climate change and loss of habitat we are currently found in parts of states like Uttar Pradesh, Bihar, West Bengal and the Brahmaputra valley of Assam.

While once upon a time we roamed around free our, numbers are limited to roughly 2,000 now. As per a recent survey by Assam’s Kaziranga National Park, there are 2,413 rhinoceroses in India, with most of them living in the wildlife sanctuary which is also a UNESCO Heritage Site.

We have sharp hearing and smelling abilities, which helps us move quickly despite our huge size. We can often trace our family members and friends by their scent. Being herbivores, we feed on grass, plants, and fruits. We often slip into cooler areas or even enjoy a swim in water in the scorching heat.

When it comes to making friends, we are very choosy and mostly prefer to stay aloof. However, we get along famously with birds and often offer them a ride on our backs when we are swimming.

Do you know we were mentioned in an early Buddhist textbook Rhinoceros Sutra? In the book, the author explains the merits of living like ascetics by teaching people how to live freely and alone like us.

While we love the forests but we are also found in various wildlife sanctuaries and national parks. For instance, you can drop by with your buddies at Kaziranga National Park, Pobitora Wildlife Sanctuary and Manas National Park, all of which are in Assam. Also, many of us Indian rhinoceros also live in West Bengal’s Jaldapara National Park and Gorupara National Parks. Apart from these, some of my family members also live in Uttar Pradesh’s  Dudhwa National Park. If you live in other cities, don’t worry you can always ask your schools to arrange a trip for you and your classmates. The forest departments in states offer special assistance and tours to kids who want to meet us.

While I roam around freely in a wildlife sanctuary, I am always worried about my future. Many rhinoceros have been killed in the past for horns which are used for making medicines in Taiwan, Hong Kong, and China. As a result, we are on the brink of extinction. Though poaching is banned in India, rhinoceroses are regularly poached for their prized horns.

The International Union for Nature Conservation has categorized us as a ‘vulnerable’ species in its Red List, which is a database of endangered animals. Being vulnerable means, we might disappear from the face of the earth if no action is taken against illegal horn trafficking and poaching. The Greater One-Horn Indian Rhinoceros has been in the appendix of Convention on International Trade in Endangered Species of Wild Flora and Fauna (CITES) since the 1970s.

The Indian government has also launched a series of initiatives to protect us like being a signatory to CITES and introducing the Wildlife Protection Act, which makes poaching and trade of our horns illegal. However, there is still much to do. We need more support from the society so that we could be saved from rapid urbanization and loss of habitat.

However, you kids can help us from becoming extinct by becoming more aware yourselves and later educating others as well. You can come visit me at a wildlife sanctuary to see for yourself how we live.