The Olive Ridley Sea Turtles are one of the most common and smallest species of turtles found all over the world. Their scientific name is Lepidochelys olivacea and are found in the warm waters of the Pacific Ocean, Indian Ocean and the Atlantic Ocean. They are so named because of the colour of their shell which has an olive green hue, which is heart-shaped and somewhat rounded.  They can grow up to two feet in length and can weigh up to 50kg. Male and female species of the Olive Ridley Sea Turtle grow up to the same size. However, female turtles have a slightly more rounded shell as compared to their male counterparts. They come to the surface of the water every few minutes to breathe. While breathing, the olive ridley sea turtle holds its head above water for a few minutes and then slowly recedes into the water. 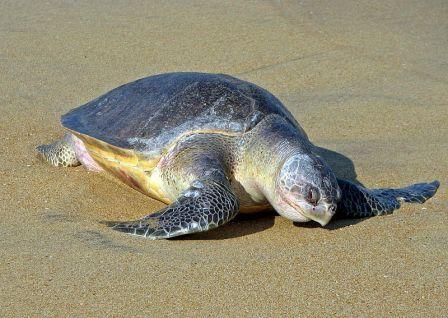 These turtles spend almost all their lives living in water and swim up to thousands of kilometers looking for mating and feeding grounds every year. The Indian state of Orissa is one of the most famous regions in the country where these turtles are found during the mating season. Though not much is known about the behavior of these sea turtles, they are not very social. However, it is not uncommon to spot them mating in groups. After their hatchlings reach the water, the olive ridley sea turtles remain solitary until the next mating season arrives. They are often confused with the loggerhead sea turtle and the green sea turtle because of their similar physical characteristics. They are closely related to the Kemp’s turtles, except that the olive ridley sea turtles are found in warmer waters and have a slightly smaller head and shell than the former.

A peculiar fact about these turtles is their unique mass nesting ritual which is called the Arribada, wherein thousands of female turtles gather on the beach to lay eggs. Female turtles return to the same beach where they first hatched to lay eggs. The coast of Orissa near Rishikuliya river is the biggest nesting site for olive ridley turtles in the world, followed by coasts in Mexico and Costa Rica. Over 600,000 turtles come out of the ocean to lay eggs on the nesting site over the next five to seven days. They dig up conical nests using their hind limbs to lay eggs in. The eggs hatch after 45-60 days and beaches are covered with hatchlings swarming all over. As the new hatchlings proceed towards the ocean, they are preyed upon by animals like birds, dogs, raccoons and hyenas. As per estimates, just one hatchling survives up to adulthood for every 1,000 hatchlings which enter the ocean.

Olive ridley sea turtles face a number of obstacles not only while migratory but during nesting as well due to human activities like turtle-unfriendly fishing practices. Often adult turtles get entangled into trawl and gill nets during rampant fishing during mating season and around nesting grounds. In addition, development of tourist locations in and around nesting grounds have led to the considerable destruction of natural habitats for this species of turtles.

Even though the international trade of turtles remains banned as per the CITES Appendix 1, turtles are still poached extensively and demanded for their skin, shell and meat. Their eggs, which are illegal to harvest, are demanded in huge numbers around coastal regions. It is because of the mindless poaching and habitat loss that olive ridley sea turtles are now nearing an uncertain future, which might even lead to extinction if such practices go unchecked.

Olive ridley sea turtles are currently categorized as ‘vulnerable’ in International Union for Conservation of Nature’s list of endangered species.

In November 2017, olive ridley sea turtles started arriving at Odisha’s Gahirmatha marine sanctuary marking the commencement of the mating season. The sanctuary is located off the Odisha coast on the shores of the Bay of Bengal near Gahirmatha beach. Wildlife department officials said that 20,22,000 eggs were hatched at the nesting ground.

On March 21, 2018, Mumbai’s famous Versova beach saw over 80 olive ridley turtles making a beeline for the Arabian Sea. As per reports, these turtles were spotted at the beach after a period of 12-15 years. The reappearance of these turtles is being attributed to the intensive cleanliness drives organized around the beach, which is one of Mumbai’s most polluted ones.

Using a technique called the satellite telemetry, a team of scientists from the Wildlife Institute of India, Odisha Biodiversity  Board and the Zoological Survey of India tracked the movement of olive ridley turtles from their nesting ground in Odisha to Sri Lanka, beyond to the Indian Ocean and back to the  Bay of Bengal recently. They found that these animals travel up to 9,000 kilometres while migrating between  beaches from one nesting season to the next.