This is a continuing series of articles on pollution. This is the first part of the series. 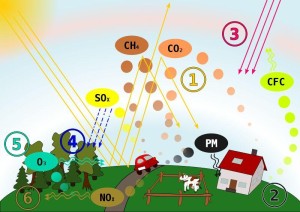 The addition of any foreign material which maybe organic, inorganic, radioactive or biological or even a physical change that can adversely effect living organisms is pollution. The effect can be direct/indirect and immediate/ long term.

One of the most important reasons for deteriorating the environment is pollution with anthropogenic sources being the primary culprit. Some of the main causes are of course, rapid industrialisation, rapid population growth, a dramatic increase in vehicles and fuel consumption etc.

Apart from these, a number of secondary pollutants also cause air pollution such as Acid Rain, Smog, PAN etc.

ACID RAIN-  The presence of excess acids in rain. Normal rainwater is somewhat acidic because the CO2 present gets formed into carbonic acid. However, if SO2 and NO2 are also present, rainwater becomes more acdic and forms what is known as acid rain (pH below 5.6). Acid rain is basically a mixture of H2SO4 and HNO3. Suphuric acid is the main constituent generally with Nitric being second and sometimes HCl being the third component. The effects of Acid rain are varied right from aquatic systems to terrestrial, on buildings and monuments and also on human beings.