With globalization, environmental issues across the world have skyrocketed. The ecosystem is witnessing a severe imbalance due to the hazards that industrialization has caused to the environment. Topmost among them are Air Pollution.

What is Air Pollution?

For a simple understanding, air pollution is the condition where the air is contaminated with a lot of foreign substances. These substances may be in the form of solid, liquid or gaseous substances. Such substances when present, in sufficient concentration in the air, for a sufficient period of time, under certain conditions causes damage to the environment and this kind of air we breathe, interferes with the comfort of human beings, and their general well-being.

So, how do we measure Air Pollution?

Every city has a monitoring station, normally the Pollution control board, which measures the quality of air. These stations measure the presence of contaminants that pollute the air such as Carbon monoxide (CO), Ozone (O3), Nitrogen Dioxide (NO2), Particulate matter (PM2.5), Sulphur dioxide (SO2) and Hydrogen Sulphide(HS2).

These elements present in the air are measured in one of the two ways:

Over the years, a sharp increase in the number of vehicles, especially ones using diesel has been a major cause of air pollution in Delhi. Other factors are road dust, with a high concentration of metallic substances such as Copper, Nickel, Magnesium, Barium, Zinc, etc., forms the major sources of particulate matter for polluting the air in Delhi. Also, burning piles of trash caused by abundant garbage all over the city causes high levels of particulate matter, mercury and other harmful chemicals that pollute the air.

Another factor that adds to the pollution of the city is the emission caused by industries in and around Delhi. Although most of them are small-scale industries, they also add to air pollution in Delhi. These industries fudge data to obtain permissions and not following the stipulated rules laid down by the Delhi Pollution Control Committee. 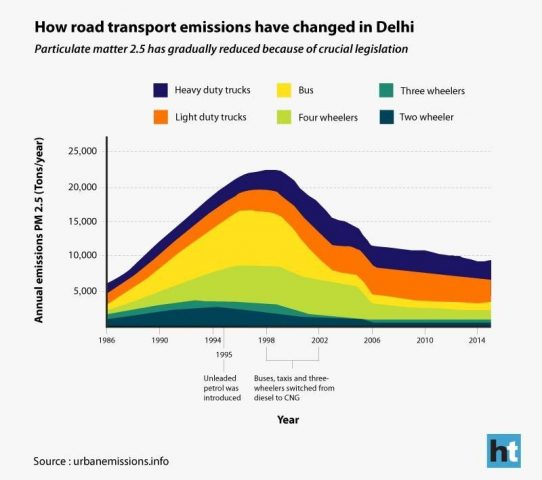 The Air Quality Index helps us measure the Air Pollution Levels at different locations. One can get real-time data on current levels of air pollutions across different locations through www.aqicn.org/.  This year, the air pollution levels at Delhi were 40 times over the permissible safe limits. Particulate matter-PM2.5 and PM 10, were at least 15 times over the permissible safety limits, as reported by the Delhi Pollution Control Committee. In places such as RK Puram, the pollution levels were 42 times worse than the safety limits.

Even, with this kind of a data, the good news is, Delhi which was rated as the world’s most polluted country by WHO, has come down places to the 11th position due to various strict measures implemented by the government to curb pollution in the past two years.

The Prevention and Control of Pollution Act, 1998 was enacted by the Central Government to curb pollution and thereby arrest the deterioration of air quality. The present National Ambient Air Quality Standards (NAAQS) were advised on eighteenth November 2009, by the Central Pollution Control Board, which sets benchmarks for the nature of air.

Unfortunately, among the top 20 polluted cities in the world, India has the maximum number of polluted cities.  Thirteen out of the twenty most polluted cities in the world are in India, in comparison to our neighbor China that just has three of them. Although, until recently Delhi was the most polluted city in the world, it’s not anymore as per reports released by WHO. Delhi has dipped from the No.1 position in 2014 to No.11 position in 2016. Along with Delhi, other 6 major cities such as Patna, Raipur, Agra, and Varanasi far surpass the toxic levels of Beijing and other Chinese Cities. Almost 32 stations across India have reported air toxic levels that have exceeded by more than 70% of the National Standards.

The biggest question now is the control of such extreme levels of air pollution and the measures that all citizens have to exercise in order to control air pollution.

Measures to look after one’s health