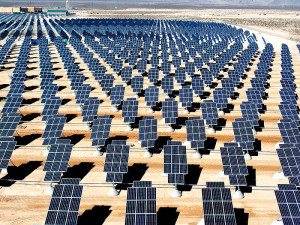 The state owned power utility company MAHAGENCO (Maharashtra State Power Generation Co. Ltd) is successfully operating a solar PV power plant since the past one year in Chandrapur district of Maharashtra. MAHAGENCO operates large thermal power plants in the state making it a major power generating company. MAHAGENCO initially commissioned one demonstration solar PV project of 1MWp capacity. However, this project is its first fully fledged solar project and the electricity generated from it will be used to fulfill Renewable Purchase Obligation (RPO). Solar power project has a total of 4 MWp of installed capacity. Break-up of the total capacity is 2 MWp based on Thin Film Technology and a 2MWp based on Multi Crystalline Technology. The project was commissioned in Feb 2012.

Project technology: Project is using both Crystalline and Thin Film technologies. The generated DC power from solar panels is being converted into AC power using inverters. The output electricity from the inverters is being stepped up to 33Kv using transformers.  The electrical power at 33 kV level is evacuated through appropriate transmission arrangements to a 33 kV feeder from Chandrapur MIDC substation and connected to the 33 kV grid.

MAHAGENCO is also availing benefits of carbon credits. The project is registered under Clean Development Mechanism (CDM) which is governed by the United Nations Framework Convention on Climate Change (UNFCCC). Please find relevant information below;

The status of carbon market is uncertain and hence the possible revenue from this project is expected to be lower than usual. Please read more about the current scenario of carbon market and knowhow of the situation.

This project has created a good example for state owned utilities. In addition, the clean energy generation from this project is contributing in reducing greenhouse gas (GHG) emissions of India.