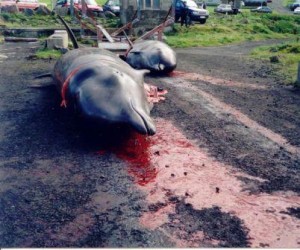 Around 400 dolphins carcass were found on beaches in northern Peru last month, baffling authorities who have not been able to ascertain the cause.

The bodies were found on beaches stretching across the northern departments of Piura and Lambayeque, which is near to the Ecuadorean border in northern Peru, said Peruvian Sea Institute (IMARPE) official Jaime de la Cruz in Chiclayo.

Lima received the samples and autopsies would soon be conducted.

Local media reports attributed the cause of death to toxic algae.

But as per experts views, humans would have been affected also if toxic algae were the cause behind the sudden deaths since humans consume sea food.

Dolphins are closely related to whales and porpoises. There are almost forty species of dolphin.

Some Dolphin species such as the Amazon dolphin, and the Ganges and Yangtze river dolphin are facing threats of extinction and are regarded as endangered species.