How Traditional Knowledge can Save us from Water Scarcity

Water conservation in India is not a new concept. One of the earliest sites of the Indus Valley civilisation, Dholavira in the Gujarat state has well documented storage reservoirs in the form of lakes to collect surface run offs during the rainy season1. Not only that, there were intricate channels and check dams for various purposes. Such structures have also been found in other sites such as Harpapa and Mohenjodaro. Sringaverapura tank in modern day Uttar Pradesh was built sometime in the 1st BC and is a shining example of engineering during the early period of Indian civilisation. It had a remarkable system to clean water through desiltation2. Naneghat in modern day Maharshtra is perhaps the oldest example of harvesting system for storage of water. 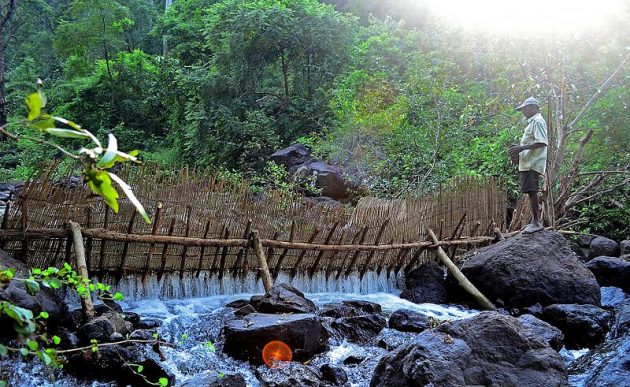 Perhaps the most unique and elaborate network of well connected water drainage and storage system is found in Burhanpur, Madhya Pradesh. The place not very famous today is a must visit for any student of hydrology. Any fort surviving today has well organized storage systems. This was of importance since forts were built to provide supplies during long drawn wars where outside movement was restricted.

The Indian system of using brass vessels to clean water is well documented and continues till today. It is not uncommon even today to find water filter systems made out of brass. Older people in India use brass pots to store water during the night and consume it during the day time.

Almost every region in India has its own unique method of storing and conserving water prevalent since times immemorial. While some methods such as baolis in Delhi have been long forgotten, others such as guls in Uttarakhand are commonly used even today.

For a quick overview of water conservation practises in India, this site is a good start.

Zing3 is basically a system of collecting water from melting glaciers. Common in Jammu & Kashmir region and Ladakh, zings are small tanks that collect the water that melts from glaciers and can be used in other seasons.

Uttarakhand has a rich tradition of water conservation. Although the state is richly endowed in terms of water availability, the system to supply is scarce even today, Many ingenious systems have been in place to collect and supply water to the regions in Uttarakhand.

Naula is made traditionally from stones and is basically a small hut like structure that houses a spring. The floor should be left pervious4.

Gul is more of a system to divert and supply water rather than to store water. Gul are small channels that originate from a source (usually underground but may even be surface) and then are diverted to fields or wherever needed. Nowadays, guls are a permanent feature and usually built from stone masonry works and channelize water primarily for supply into agricultural fields.

Dhara is again simply a spring source. In Uttarakhand, there was a practice of providing attractive features such as the mouth of a lion or bull at the mouth of the spring and some such dharas can be found near temples and important rest points such as bus stations.

Kul is just like a gul and is a channel to divert away water from a source (usually a glacier).

Khatri is basically a rain water harvesting tank built out of stone to grant it some permanency. The structure should be impervious so the water doesn’t percolate.

Johad is a simple yet ingenious, low cost method of collecting rainwater. A pit is dug and the connecting johads are connected to it. When many johads lead into such a pit, the amount of water collected can satisfy a village’s requirements. Rajendra Singh of Tarun Bharat Sangh made johads popular and is popularly known as waterman for his immense contribution.

Bawaris are stepwells. Rainwater is collected inside the stepwell which also provides some protection against evaporation. The rainwater collected helps in raising the ground level of water in the area something that johads can also help in achieving.

Taanka was widely used in the Thar desert of Rajasthan. It is basically an underground tank into which water is collected by means of rainwater harvesting.

Zabo is practised in some areas in Nagaland. The first stage includes conservation of forests since they help in increasing rainfall and are an important source of catchment. Small channels are built that divert the water from such forest hilltops into a reservoir at a lower level. This water is then used for farmlands. The water during its runoff accumulated organic matter such as dung and other plant waste which serves as nutrient for the farmlands.

A kund is basically a reservoir usually shaped like a saucer and into a well that is used to store rainwater. The lining is done with lime to prevent contamination of water.

Ahars are reservoirs and include an embankment on three sides. The fourth side allows movement of floodwater. So an ahar pyne is basically a system for floodwater diversion and storage and ahars are usually built close to a drainage source5.

A bhandara is a check dam that is used to increase the water level of a river or stream so it starts to channelize and can fulfil the irrigation requirement of a region. A very popular practice in ancient times, it is now redundant.

The Ramtek model is named after the town in Maharashtra where the practice originated. It is an elaborate network of channels with underground supply and the water is channelized through an extensive network of tanks, baolis that replenish the water supply.

Usually prevalent in ancient times, the practice is almost non-existent nowadays. Small check dams were erected which are known as katas. The entire area would be blocked off to collect the water in a region which would serve to help the community needs for irrigation. The shape would generally resemble a triangle or rectangle and would be used for large fields.

Erie and Ooranis are tanks constructed to collect and house water that can be used during the dry season for irrigation needs.

Dongs are small ponds which are constructed to collect water and can help in restoration of ground water levels and serves as important sources of reservoirs for the community.

Baolis are stepwells and many survive till today in Delhi. Raja ki baoli is one famous structure which is now famous as a tourist site.

Bamboo drip irrigation system primarily used for black pepper cultivation is an ingenious system prevalent in the state of Meghalaya. Bamboo channels are used to divert the water away from a source such as a spring and through the intricate system of bamboo channels, it reaches the fields where it can serve irrigation purposes.

This is a wet rice cultivation seed fish farming system practiced by Apatani tribes of Arunachal Pradesh. The entire region is terraced into plots separated by dams which are in turn supported by bamboo frames. All plots have water and outlet on opposite sides. The water of lowlying plot functions as an outlet of the high-lying plot. Deeper channels connect the water purpose to outlet purpose.

Virdas involved digging out small wells in a low lying area to collect and harvest rainwater.

Surangam are tunnels that divert the water away from a well that is dug deep into the ground. The practice was widely used in Kerala. At the mouth of the surangam, a reservoir is constructed to collect and store the water.

Korambu is a temporary dam stretching across the mouth of channels, manufactured from brushwood, mud and grass. Korambu is made to boost the water level within the canal and to divert the water into field channels. Water is allowed to result one field to a different till all the sector ar irrigated.

Jackwells are small ponds which are used to harvest rainwater. Similar to bamboo drip irrigation, bamboo strips are used to channelize the water and an intricate system of jackwells would be built leading from smaller ponds to bigger ones that served as reservoirs. The entire system is constructed keeping in mind gravity so that a natural flow is maintained.

Madakas are naturally occurring depressions and gravity is utilised to divert the rian water runoff which is then stored.

The Neeruganti6 was a person who can be thought of as an irrigation officer in a village. The practice is used even today in Uttrakahand to maintain and distribute water from guls and the person is known as kotwal. In such a system, the water from a reservoir would be diverted to different fields and the person in charge takes care of how often and what time the water will be allocated. Usually, the village elects or nominates a person who looks after the system.

Dungs or jampols are an elaborate but tiny netowork of irrigation canals that divert water away from a river or stream and into the fields for irrigation primarily.

A cheruvu can be a tank or a small pond that was used as a reservoir to conserve and store water. Cheruvus are highly polluted as of today and the practise is dying.