Steel is the building block in economic development. We are using steel right from miniature tools to large construction activities like dams, buildings and bridges. The consumption of steel also indicates the economic development of the country. The iron and steel industry has experienced enormous growth in the past 50 years.  Global crude steel production reached 1527 MT in 2011 showing a 6.8 % growth over 2010. India has emerged as a leading player in the global steel industry contributing to about 4.7 % of global crude steel production in 2011. Large scale infrastructure expansion plans for the twelfth five year plan and raising per capita steel consumption in India promises unprecedented growth potential of Indian steel Industry during next 10 years. The Indian steel industry plays an important role in the country’s economic growth. (Reference: IORR: Industry Outlook Reference Report Steel Industry in India – 2013)

Although steel contributes in the development of the country, its production process emits huge amount of Green House Gases (GHGs) in the atmosphere.  Steel making consumes large amount of energy which mainly is derived from the coal – a relatively unclean fossil fuel on the earth. It is a big concern to India which want to continue its growth as a low carbon economy.

Greenhouse gases like Carbon dioxide, Methane, Sulfur hexafluoride and others enhance the greenhouse effect on the earth’s atmosphere which results in additional warming of the earth. This in turn creates changes in distribution of climatic patterns which is known as climate change (Know more about climate change here). Therefore, increasing anthropogenic GHG emissions contributes towards climate change. 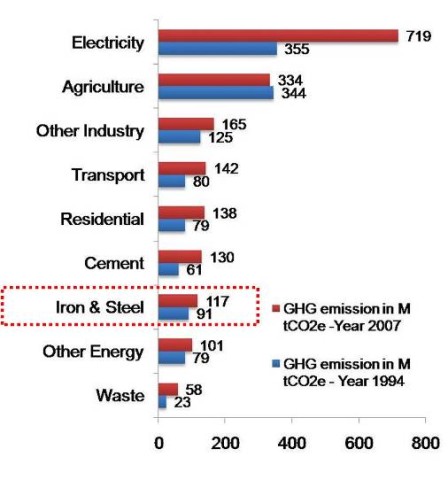 India is now the world’s third largest emitter of greenhouse gases, ranking behind China. India’s Ministry of Environments and Forests released its greenhouse gas inventory of 2007 emissions in May 2010. As per the inventory report, India’s emissions have grown at an average annual rate of 3.3 percent, increasing from 1.25 billion tons in 1994 to 1.9 billion tons in 2007. The report analyzes emissions from Electricity use, Agriculture, Iron and Steel industry, Transportation, land use change and other industries.

Iron and Steel sector solely contributed 117.32 million tons of carbon dioxide equivalent emission in 2007 which is 26.79 million tons higher than the year 1994. It is due to the growth of steel sector and its high energy intensive operations. In order to strive on sustainable path for the nation, India launched the National Action Plan on Climate Change (NAPCC) on 30th June 2008. The National Action Plan has been prepared under the guidance and direction of Prime Minister’s Council on Climate Change. Under this plan, the Government of India (GOI) has set a target of reducing country’s carbon emissions intensity of GDP by 20% to 25% between 2005 and 2020. To achieve these targets, GOI has come up with various set of regulations that compel companies to adopt GHG emission reduction activities. Being a major emitter of GHGs, Iron and steel sector companies are required to  measure their GHG emissions and start  reduction activities. This article outlines information on GHG accounting and management in Iron and Steel sector.