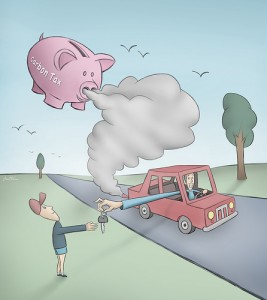 Increasing concentrations of GHGs resulting from burning of fossil fuels are gradually warming Earth’s climate. Fuel molecules consist of tetravalent carbon atom which is the source of energy. When fuel gets burnt in the presence of oxygen released carbon dioxide with other polluting gases resulting in climate change.

Carbon tax can be called as a tax on carbon or an environmental tax that is mostly levied on carbon content of the fuel. The fundamental concept behind carbon tax is to prevent the over use of fossil fuels and limit it to a certain level.  In addition it helps to pave ways for non carbon or less carbon technologies.

Presently there are three types of fuels that are being used abundantly in the energy generation i.e. Coal, Gas and Oil. Among these, coal is mostly used for power generation and other applications like thermal energy in manufacturing and process industries. India alone is the largest consumer of coal.  In 2007, India’s coal consumption had reached about 38-42% of the total energy consumption. Oil consumption was in the range of 20-25% followed by natural gas 5-8%. On an average, coal requirement for power generation in India requires 1.3% growth rate per year. (US Energy information administration)

Burning of fuel causes pollution and is termed as a negative externality in environmental economics. Fuel is a top requirement for any growth purpose however use of fuel also results in pollution. Hence levying cost on the negative variable of the fuel (here negative externality i.e. GHGs) can incur the cost of damage associated with the burning of fuel. That’s what the conceptual beginning of carbon tax is.

To prevent over use of high carbon intensive fuels; in 2010, Government of India had set up policy on carbon tax (Rs. 50.00 for each metric ton of coal used in India – domestic or imported both ).  In addition it helps to create National Clean Energy Fund for financing research and innovative clean energy technologies in the country.

India expects to raise $535 million from a levy on coal producers starting today, the first step by Asia’s third-largest energy consumer to charge companies for fossil fuel pollution. “This will give 25 billion rupees ($535 million) this year alone,” Environment Minister Jairam Ramesh said in Mumbai, calling it “a carbon tax that will be used for clean energy.”

Reducing emissions by 25% below the 2005 levels, till 2020 is a recent target set by India itself. Carbon tax is a positive step towards reduction of carbon emission in the country. Carbon tax might be a very good option for the efficient use of fuel but its success lies in increasing investment in the non carbon technologies like wind energy, solar energy and other form of non conventional energy sources.