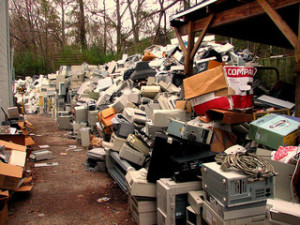 E-waste is anything that is generated from the after use of an electronic product. The unauthorized dismantling and recycling of E waste is harmful and may cause pollution. There has been a marked upsurge in the consumption of electronic items both in developed and developing countries. This has simultaneously lead to increased generation of E-waste which needs to be disposed and recycled in a manner that does not pose a threat to the environment.

The rules provide for reduction in the hazardous waste utilized by 1 May, 2014. Any manufacturer that produces equipment listed in Schedule 1 needs to ensure this requirement.

The hallmark of the rules is the introduction of EPR (Extended Producer Responsibility) which means the responsibility of the producer does not merely end with the sale of the product but is extended to the product’s end cycle or final consumption including waste disposal. After the product has been used to its fullest capacity by a consumer, EPR ensures that it is disposed off in a manner that is sustainable and the E waste does not cause any pollution.A survey done by Central Pollution Control Board (CPCB) in 2005, revealed that 1,46,800 MT of e-waste was generated in the country. As per the 2018 amendment, The revised Extended Producer Responsibility targets shall be applicable from 1st October 2017 as per Schedule III.

There are a total of 98 number of registered recyclers and dismantlers having recycling/dismantling capacity of 29,30,57 MTA for environmentally sound management of e-waste under the E-Waste Rules, 2011. With 39 numbers, Karnataka has maximum number of registered recyclers/ dismantlers followed by Tamilnadu (19), Maharashtra (15) and Uttar Pradesh (11). Others are distributed in the States of Andhra Pradesh, Chhattisgarh, Gujarat, Haryana, Madhya Pradesh, Rajasthan, and Uttarakhand.