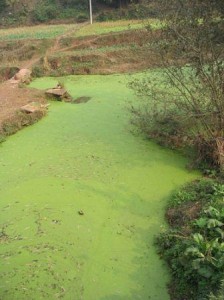 China has seen largest growth of algae with vast blooms in the yellow sea shores. Bulldozers employed to shove off algae and clean water.

The State Oceanic Administration said on its website that the algae, Enteromorpha prolifera, started to appear a week ago and had spread across an area of 28,900 square kilometres (7,500 square miles).

A similar bloom had happened in 2008 also affecting several kilometres.

Algal blooms are usually associated with high nutrient content and some are harmful as they can produce neurotoxins. Agal blooms can occur both in fresh and sea water.

As algal blooms increase, other species die and the dead serves as food for bacteria. With more and more fodder, dissolved oxygen in water is depleted affecting aquatic and marine life.  This ultimately adversely affects the productivity of the aquatic ecosystem.

The China Daily quoted Professor Bao Xianwen, of the Qingdao-based Ocean University of China, as saying: “It must have something to do with the change in the environment, but we are not scientifically sure about the reasons.”