Delhi or the National Capital Territory (NCT) of Delhi is a metropolitan region located in northern region of India housing the national capital city, New Delhi which is India’s second most populous city after Mumbai. NCT of Delhi comes under administrative division of Union Territory. However, it has special status and has its own elected legislative assembly.

Institutional structure of the power sector in NCT of Delhi

In the year 1905, under the provisions of Indian Electricity Act 1903, the first power plant was established in Delhi. This power plant was started by an English company- M/s. John Fleming with both generation and distribution responsibilities. During the same time, this company transformed into Delhi Electricity Supply and Traction Company and further Delhi Central Electricity Power Authority (DCEPA). Post independence, the Delhi State Electricity Board (DSEB) came into existence and it had the responsibility of generation and distribution. Further, DSEB was transformed into various forms such as Delhi Electric Supply Undertaking (DESU) and Delhi Vidyut Board (DVB).

In 1997, Government of NCT of Delhi formed Delhi Vidyut Board (DVB) for the purpose of generation and distribution of power in Delhi and National Capital Territory (NCT) regions. In May 1999, the Delhi Electricity Board Regulatory Commission (DERC) was constituted to look after regulatory matters such as tariff order creation, etc.

IPGCL operates Rajghat Power House of installed capacity 135 MW and one natural gas based power plant (Gas Turbine Power Station) of installed capacity 270 MW. The other power generation company named Pragati Power Corporation Ltd (PPCL) is operating a natural gas based power plant in Delhi which was commissioned in 2003 – 2004. It has three units of capacity 2 X 104 MW and 1 X 122 MW. GAIL is providing natural gas for these power plants. As per the latest news on ‘The Hindu’ (English daily), the Delhi Cabinet has decided to merge Indraprastha Power Generation Company Limited (IPGCL) and Pragati Power Corporation Ltd (PPCL) into a single unit. 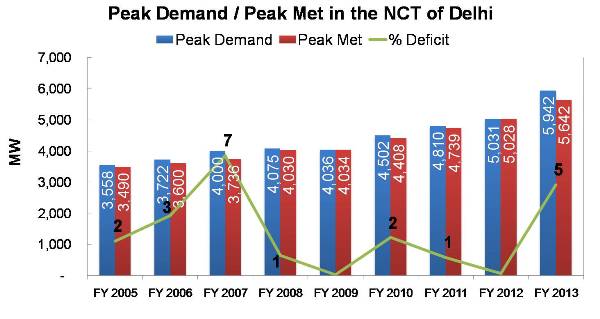 There were very minute electricity deficits in Delhi as compared to other states. Between 2005-06 and 2012-13, electricity requirement and availability, both grew at CAGR of 3%. (See graph below).

Renewable energy contributes 10% share of the total installed capacity of the NCT of Delhi (Including state, private sector and central owned power generation capacity) which is around 685 MW. Out of this capacity, 666 MW is from small hydro power and 19 MW is from other renewable energy sources.  Renewable energy sources like solar and other technologies are coming up with better efficiency and cost effectiveness.  NCT of Delhi has opportunities to harness solar energy due to its better solar resource potential. Rooftop solar can be a better option to source green energy as it doesn’t require additional land. As per news sources, the Government of Delhi has announced installation of a solar power plant of 5 MW installed capacity at Delhi. This power plant will provide solar power to meet the energy demands of Delhi Secretariat.

If you have any questions regarding the article, please write to us at contact(at)greencleanguide(dot)com