The energy generated due to the movement of wind is called wind energy. Wind turbine is the mechanical device that converts wind energy into electrical energy. As per the estimates, India’s wind energy potential is about 50,000 MW (At 50 meter of hub height, C-WET). As of2013, India has an installed capacity of 19,564 MW for wind energy (Aug 2013). In the last ten years, India has experienced a rapid growth in wind installation. This growth has occurred due to the twin benefits of Generation Based Incentive (GBI) and former Accelerated Depreciation (AD) benefits (tax breaks).  Following graph shows state wise wind energy capacity in the country; 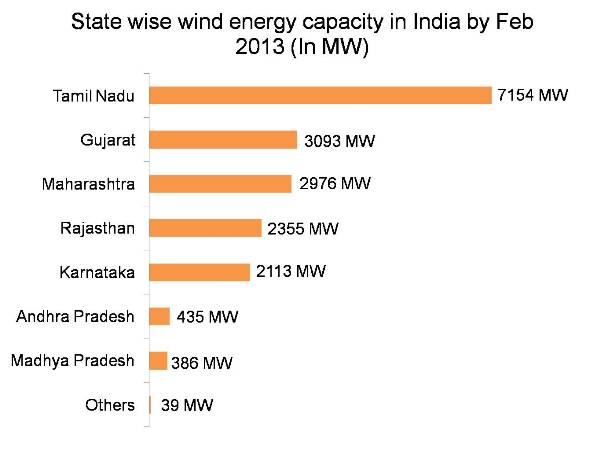 Wind electricity generation is based on the speed of wind which is variable. Wind speeds may vary within minutes and affect power generation.  South-west summer monsoon strongly influences wind speed in India but Indian monsoon itself is highly unpredictable. It starts in the month of May/June due to the movement of cool and humid air moves towards the Indian Peninsula from Indian Ocean and remains for around four months (causes rain). As per the assessment of Indian Wind Energy Association, during the period of March to August, the winds are uniformly strong over the whole Indian Peninsula, except the eastern peninsular coast.  Wind speeds during the period November to march are relatively weak and hence this results in lower generation.

The recently introduced Renewable Energy Certificate (REC) mechanism   by the Central Electricity Regulatory Commission (CERC) has also helped the wind energy sector to become profitable. However, due to poor implementation of Renewable Purchase Obligations (RPO) has resulted in a  poor performance of REC trading on energy exchange.  RPO is a mandatory obligation on state utilities and other obligated entities to source certain percentage of renewable energy in their total energy mix. To fulfill RPO, obligated entities either can source electricity from renewable energy source or purchase REC on energy exchange. One REC is equivalent to 1000 units of electricity from renewable energy source.

AD benefit has been withdrawn by the government in this year; however wind energy developers are demanding to restore AD benefits to support the sector.