Some important court petitions and judgements

In the case of M.C. Mehta vs. Union of India (AIR 1987 SC 1086), Ganga Tanneries Case, the S.C. by further extending the scope of Article 21 held that the enterprise is strictly and absolutely liable to compensate – no exception… 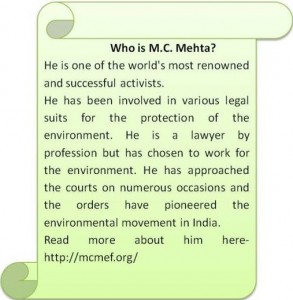 In the Oleum Leak case 1985, a Writ Petition by Shri. M.C.Mehta in 1985 sought directions from the Hon’ble Court that various units of Shriram Industries were hazardous to the community and therefore be directed to closed; Judgment on 17.2.1986; Before that a leakage of Oleum gas in Dec 1985; Claim for compensation for victims; Issues raised involved substantial question of law relating to the interpretation of Article 21 and 32….

“… where there is a violation of a fundamental or other legal right of a person or class of persons who by reason of poverty or disability or socially or economically disadvantaged position cannot approach a Court of Law for justice, it would be open to any public spirited individual or social action group to bring an action for vindication of the fundamental or other legal right of such individual or class of individuals and this can be done not only by filing a regular writ petition but also by addressing a letter to the court”.

“… Article 32 does not merely confer power on this Court to issue direction, order or writ for enforcement of the fundamental rights but it also lays a constitutional obligation on this Court to protect the fundamental rights of the people particularly in the case of poor and the disadvantaged who are denied their basic human rights and to whom freedom and liberty have no meaning”

In L.K. Koolwal vs. State Of Rajasthan and Ors. 1986, petition for the problem of sanitation in Jaipur city.

the judgement-  “…..Article 51A gives a right to the citizen to move the Court for the enforcement of the duty cast on State, instrumentalities, agencies, departments, local bodies and statutory authorities created under the particular law of the State. It provides particularly under Clause (g) that the State and its instrumentalities and agencies should strive to protect and prove the natural environment….”

“…Mr. Koolwal has approached this Court in exercise of rights vested in him under Article 51A, though it is said to be a duty, that the Court should issue directions against the respondents to implement the law, the Municipal Law and to perform the obligatory duties cast on the State. Maintenance of health, preservation of the sanitation and environment falls within the purview of Article 21 of the Constitution as it adversely affects the life of the citizen and it amounts to slow poisoning and reducing the life of the citizen because of the hazards created, if not checked….”

“….In the result, I accept the writ petition and hereby direct the Municipality to remove the dirt, filth etc. within a period of six months and clean the entire Jaipur City and particularly in relation to the areas mentioned in the list submitted by the petitioner with this writ petition….”

“….Municipality cannot say that because of the paucity of fund or because of paucity of staff they are not in a position to perform the primary duties. If the Legislature or the State Govt. feels that the law enacted by them cannot be implemented then the Legislature has liberty to scrap it, but the law which remains on the statutory books will have to be implemented, particularly when it relates to primary duty….”

“…The Indian Constitution, in the 42nd Amendment, has laid the foundation in Articles 48A and 51A for a jurisprudence of environmental protection. Today, the State and the citizens are under a fundamental obligation to protect and improve the environment, including forests, lakes, rivers, wildlife and to have compassion for living creatures…”

“…If there is necessity and desirability of having Sewage Treatment Plant or Plants, the same be set up without further delay. The Storm Water Drain may be operated in such a manner as to prevent entry of sewage water through it to the rivers. The exercises indicated by us and such other decisions and exercises as may be necessary to prevent pollution of water may be taken within one year from today…”

Some other noteworthy cases

Central and state acts for the protection of the environment are: