Climate Policy Initiative (CPI) is an independent, not-for-profit organization headquartered in San Francisco, dedicated to helping nations achieve low-carbon development. They are a team of analysts and advisors that work to improve the most important energy and land use policies around the world, with a particular focus on finance. They support decision makers through in-depth analysis on what works and what does not. Our work helps nations grow while addressing increasingly scarce resources and climate risk. This is a complex challenge in which national policy plays a crucial role. CPI works in places that provide the most potential for policy impact including Brazil, China, Europe, India, Indonesia, and the United States. In India, CPI partners with the Indian School of Business.

As per the new analysis by CPI, of the potential new coal-fired power plants that are currently planned or under construction, 77% are at risk of causing asset value loss. Hence, the government and banks should be aware of future risks of fossil-fuel asset value losses. Basis the above finding, CPI has clearly stated the priorities for action for India:

Mr. David Nelson – Senior Director, Climate Policy Initiative answered queries by GCG. David manages CPI’s global research program as a Senior Director. Prior to CPI, he worked as an investor and strategic advisor to energy and utilities companies and their regulators in Europe, Asia, North America, South America and Australia for more than 20 years. He was the senior vice president and global sector leader for Energy, Utilities, and Commodities at AllianceBernstein, and was a strategy consultant at the Boston Consulting Group as well. David has degrees in engineering from the University of California at Berkeley and an MBA from Wharton.

Following is the transcript of our interview with him-

Based on our analysis, if India’s goal is to reduce emissions to a level consistent with a 2 degree scenario while minimizing asset value loss, it would do well to avoid investing in new coal-based power plants. Existing plants are not at risk of value loss during such a transition to a low-carbon economy, but plants under construction or being planned are at risk.

How can we reduce the cost of renewable energy to make it competitive with conventional energy? What is the government’s role in doing so?

Renewable energy based power projects such as solar plants are still struggling to get finance at low cost as compared to the conventional ones. What do you suggest in order to bridge this gap?

As mentioned above, low-cost, long-term debt is the most effective way forward for renewable energy in India. We completed analysis that explored different instruments to achieve this goal,

Instruments used in other regions as well as those that were recently introduced in India in other contexts that have the potential to provide and/or facilitate low-cost, long-term debt for renewable energy in India. These include government bonds, mutual funds, partial credit guarantees, partial risk guarantees, and currency hedges.

The following chart summarises our findings: 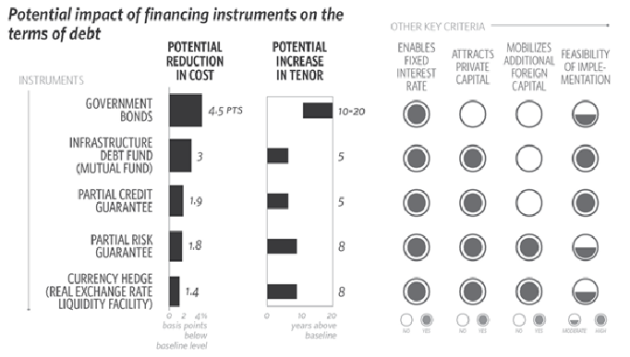 Germany with its Renewable Energy Law has successfully demonstrated how renewable energy can be expanded to its advantage. Can a similar model work for developing economies too?

India can certainly benefit from a transition to a low-carbon economy, though its path will be different from Germany’s or that of other developed countries. Our analysis shows that India could save $600 billion from such a transition. Policies that reduce demand, support innovation, provide low-cost debt, increase energy efficiency and substitute clean energy sources rather than build new coal-fired power plants, will be necessary to achieve a growth-focused transition to a low-carbon economy.