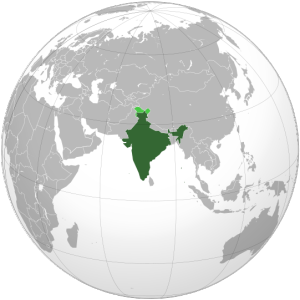 Global warming is defined as an increase in the average temperature of the Earth’s atmosphere, especially a sustained increase significant enough to cause changes in the global climate. The term global warming is synonymous with an enhanced greenhouse effect, implying an increase in the amount of greenhouse gases in the earth’s atmosphere, leading to entrapment of more and more solar radiations, and thus increasing the overall temperature of the earth.

An introduction to the profile of India

India is the second most populous country of the world with a population over 1.2 billion. India lies to the north of the equator between 6° 44′ and 35° 30′ north latitude and 68° 7′ and 97° 25′ east longitude. It shares a coast line of 7517 km with the Indian Ocean, the Arabian Sea and the Bay of Bengal. It has land boundaries with Pakistan, China, Nepal, Bhutan, Burma and Bangladesh.

India exhibits a wide diversity of temperatures. The Himalayas participate in warming by preventing the cold winds from blowing in, and the Thar desert attracts the summer monsoon winds, which are responsible for making the majority of the monsoon season of India. However, the majority of the regions can be considered climatically tropical.

Impacts of global warming on climate of India

According to surveys, in the year 2007-2008, India ranked the third highest in the world regarding the number of significant disasters, with 18 such events in one year, resulting in the death of 1103 people due to these catastrophes.

The anticipated increase in precipitation, the melting of glaciers and expanding seas have the power to influence the Indian climate negatively, with an increase in incidence of floods, hurricanes, and storms.

Global warming may also pose a significant threat to the food security situation in India.

According to the The Indira Gandhi Institute of Development Research, if the process of global warming continues to increase, resulting climatic disasters would cause a decrease in India’s GDP to decline by about 9%, with a decrease by 40% of the production of the major crops. A temperature increase of 2° C in India is projected to displace seven million people, with a submersion of the major cities of India like Mumbai and Chennai.

Recent climatic disasters in India due to global warming

India is the most flood distressed state in the world after Bangladesh, accounting for 1/ 5th of the global deaths every year with 30 million people displaced from their homes yearly. Approximately 40 million hectares of the land is vulnerable to floods, with 8 million hectares affected by it. Unprecedented floods take place every year at one place or the other, with the most vulnerable states of India being Uttar Pradesh, Bihar, Assam, West Bengal, Gujarat, Orissa, Andhra Pradesh, Madhya Pradesh, Maharashtra, Punjab and Jammu & Kashmir. The climatic history of India is studded with a very large number of floods, which have wreaked havoc on the country’s economy.

The top floods in India’s history

Other major floods in India

Other climatic disasters in India

Droughts: Of the total agricultural land in India, about 68% is prone to drought of which 33% is chronically drought prone, receiving rainfall of less than 750mm per year. This is particularly the states of Maharashtra, Gujarat, Rajasthan, Karnataka, Andhra Pradesh and Orissa. The World Record for Drought was in 2000 in Rajasthan, India.

According to researches, unabated global warming will lead to exacerbation of the droughts, cutting down the water availability in the plains of Pradesh and Bihar. India’s initial National Communication to the United Nations Framework Convention (UNFCCC) on Climate Change projects that Luni; the west flowing rivers of Kutchh and Saurashtra are likely to experience acute physical water scarcity. The river basins of Mahi, Pennar, Sabarmati and Tapi are also likely to experience constant water scarcities and shortages.

The Indian economy is considered as one of the fastest growing major economies. However, the country is plagued by climatic disasters that continue to wreak havoc on its economy. As a result, majority of the people of India continue to live in poverty, with malnutrition and diseases corroding the society. In this light, a comprehensive mitigation and adaptation plan needs to be drafted and implemented for better preparation and response to such climate disasters that are generated as a result of global warming.