The question may sound rhetorical to few but it is nevertheless a relevant question. The question may have become somewhat redundant in recent times but was brought again into the limelight with the Fukushima, Japan mishap. This article is an attempt to examine the safety of nuclear power and the current use of nuclear energy in generating electricity in the Indian context.

Nuclear Energy production and reactors around the world; 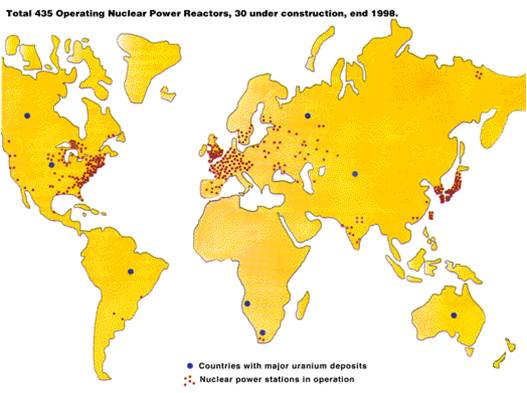 The Atomic Energy Commission of India was set up in 1948, and the Department of Atomic energy (DAE) came into being in 1952. The DAE family comprises of:

However, before India could seriously establish itself as a global power in nuclear energy, the nuclear apartheid era of India began after the Pokhran tests were conducted under the leadership of Mrs. Indira Gandhi and later Mr. Atal Bihari Vajpayee. The world reacted in horror at India asserting itself and many nations were unhappy at the development; the US even imposed sanctions while some nations like France congratulated India.

The terms of the Comprehensive Nuclear Test Ban Treaty (CTBT) and Non-Proliferation Treaty (NPT) are so discriminatory that India has been suggesting disarmament and has therefore refused to sign it. What the NPT and CTBT does, is to perpetuate a system in which only some nations can possess nuclear weapons legitimately. Without adequate fuel supply as India lacks in uranium, the progress whatsoever made in nuclear energy was limited.

CIRUS (Canada India Reactor Utility Services) shut down permanently on the last day of the year 2010. CIRUS was 50 years old reactor at BHABHA. CIRUS was the symbol of India’s nuclear energy programme. It was done to abide by the commitments made under the civil nuclear agreement with the USA.

A new era was heralded with the signing of the 123 agreement with the US which was apart from its nuclear implications, a historic treaty because it was recognition of India’s brilliant non-proliferation record and the acceptance that India is different, of profound psychological significance for Indians. India has also voluntarily declared a no first use nuclear weapons policy.

So now, at present many nuclear power plants are being set up and because of the assurance of fuel supply, are achieving criticality. India’s next step would be to enter into the Wassenar agreement and the Australian group and ensure ENR (enrichment and nuclear processing) technology too. Before we go into the safety aspect of nuclear technology, let us understand the three components of nuclear energy in India. The Indian nuclear program is in three stages. The first stage will use uranium (imported). Second stage will use enriched uranium and thorium in blanket form in fast breeder reactors and third stage will use fuel of second stage. A fast breeder reactor produces more fuel than it uses. This technology has been researched indigenously and expertise attained by India. A 500 MW prototype fast breeder reactor (PFBR) was constructed by BHAVINI (Bhartiya Nabhkiya Vidyut Nigam Limited).

The Jaitapur nuclear power plant has courted controversy on account of environmental implications; the project was passed after various checks were put into place and 20 of these conditions have to be met within an year. Another aspect concerned with nuclear technology is that the technology is untested and has not been adequately used before. However, one should not protest against the Jaitapur project solely on account of these reasons as any technology is untested for the first time and this cannot be a rational reason for not backing a technology.

I am more worried about the second stage power plants which are the fast breeder reactors and use liquid sodium as coolant and not heavy water. Liquid sodium is inherently dangerous because it catches fire with anything even air or water. What this means is that in case of a sodium fire, one can’t even use sea water as an extreme measure as the Japanese did in case of Fukushima. Patriotic sentiments must not give way to complacency as Fast Breeder Reactors can use thorium which India possesses and thereby reducing our dependence on uranium. There have been sodium fires in many countries even under normal operations.

Quite often, the environmental risk is sidelined but not so in case of nuclear power because leave aside environment, it poses a greater risk to human life too. Fukushima has taught us an important lesson that nuclear power needs to be handled with great care and caution.

As suggested by Mr. Aiyar in his article (scrutinising the safety of Thorium based power plants), the need of the hour is to have an independent panel of experts comprising nuclear experts, environmentalists, geologists etc. who are completely insulated from official control and they should undertake a comprehensive check of all current and proposed nuclear power plants in India. If they find that a particular nuclear power plant is unsafe or if Thorium based power plants needs stricter checks, then so be it. The government should not even hesitate to shut down a nuclear power plant if it is deemed to be unsafe due to geological risks or otherwise. Fukushima has shown how cruel and unrelenting nuclear power can be. Nuclear energy in India is largely under government control, therefore the verification and monitoring needs to be independent. The same body can never do both.

Germany has become the first nation to give up on nuclear energy and many more could follow. Nuclear energy no doubt is good but only if imposed with a high degree of security and safety.

India has adopted “closed fuel cycle”, where spent nuclear fuel is regarded as a material of resource. Closed fuel cycle aims at reprocessing of spent fuel for recovery of Uranium and Plutonium and recycling them back to reactor as fuel. This finally leads to a very small percentage of residual material present in spent nuclear fuel requiring their management as radioactive waste.

Safe management of radioactive waste has been accorded high priority right from the inception of our nuclear energy programme. High level radioactive waste also contains many useful isotopes like Caesium-137, Strontium-90, Ruthenium-106 etc. With the advent of new technologies based on partitioning of waste, emphasis is accorded to separation and recovery of these useful radio-isotopes so as to make use of the waste for various societal applications.

Initiatives/advancements w.r.t. partitioning of the waste have been implemented safely and successfully enabling recovery of useful radio- isotopes like Caesium-137, Strontium-90, Ruthenium-106 etc. and their deployment for societal applications. Utmost emphasis is given to waste volume minimization, effective containment and isolation of radio-activity followed by near zero discharge of radioactivity to the environment. As a waste management philosophy, no waste in any physical form is released / disposed to the environment unless the same is cleared, exempted or excluded from regulations. A comprehensive radioactive waste management is established taking into account the operational capability for the management of radioactive waste and an independent regulatory capability for its overview. The nuclear waste management practices are at par with international practices following the guidelines of International Atomic Energy Agency.

Department of Atomic Energy (DAE) has planned the use of large deposits of Thorium available in the country as a long-term option. A three-stage nuclear power programme has been chalked out to use Thorium as a viable and sustainable option, right at the inception of India’s nuclear power programme. The three stage nuclear power programme aims to multiply the domestically available fissile resource through the use of natural Uranium in Pressurised Heavy Water Reactors, followed by use of Plutonium obtained from the spent fuel of Pressurised Heavy Water Reactors in Fast Breeder Reactors. Large scale use of Thorium will subsequently follow making use of the Uranium-233 that will be bred in Reactors.  The utilisation of Thorium, as a practically inexhaustible energy source, has been contemplated during the third stage of the Indian Nuclear Programme.  As is the case with generation of electricity from Uranium, there will be no emission of green house gases from Thorium also and therefore, it will be a clean source of energy.

It is not possible to build a nuclear reactor using Thorium (Thorium-232) alone due to its physics characteristics. Thorium has to be converted to Uranium-233 in a reactor before it can be used as fuel.

Development of technologies pertaining to utilisation of thorium has been a part of ongoing activities in Department of Atomic Energy.  With sustained efforts over the years, India has gained experience in different areas of Thorium fuel cycle. Efforts are currently on to enlarge the present Thorium related R&D work and activities to a bigger scale and towards development of technologies for the third stage of our nuclear power programme. Safety has been accorded paramount importance in all Thorium technology development studies.

Commercial utilisation of Thorium, on a significant scale can begin only when abundant supplies of either Uranium-233 or Plutonium resources are available. Accordingly, the large scale introduction and utilization of Thorium in the programme has been contemplated after an adequate inventory of Plutonium becomes available from our Fast Breeder Reactors (FBRs), comprising the second stage of Indian nuclear power programme. This will be after a few decades of large scale deployment of FBRs. In preparation for the utilisation of Thorium in Third Stage of India’s Nuclear Power Programme, efforts towards technology development and demonstration are made now so that a mature technology for Thorium utilisation is available in time.