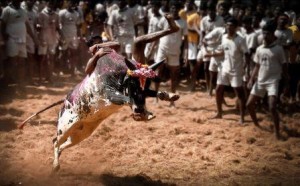 Jaliikattu is a bull taming sport that is played in Tamil Nadu during the Pongal celebrations on Mattu Pongal day.

The origins of jallikattu are in the world-famous Palamedu, near Madurai on January 15 followed by “Alanganallur-jallikattu” in Alanganallur, near Madurai on 16 January. Celebrations have been carried on since the Sangam age. Some prize such as a bag filled with money is tied to the horns of the animal which is then made to run while the players try to control it and catch the prize.

Animal rights groups have long advocated that such practices be banned as the Indian government does not support the use of animals in performances and moreover, the animals in question has no way of declaring consent and is forced and terrorised to perform for the sake of pleasing the baser instincts of man.

PETA filed a petition with the Supreme Court against the Tamil Nadu Regulation of Jallikattu Act No 27 of 2009, a state law that permits Jallikattu. Animal Welfare Board of India has also filed a separate petition in this regard. Both demanded ban on this practise.

Advocates however pointed out that Jaliikattu is not a circus but a sport and so not covered under the act. I personally feel that it is a cultural aspect but a classic case of culture being undermined by commercial considerations. Earlier, Jallikattu was held during Pongal and only during Pongal but it had become so commercial that it was held more often and even popularised as a spectator sport.

The environment ministry banned the training and exhibition of bears, monkeys, tigers, panthers and lions in 1998. Bulls were added to the list in 2011.

In 2008, the animal welfare board of India filled a case in SC, asking for complete ban of Jallikattu under Prevention of Cruelty to animals act.

In 2008-09, SC banned the Jallikattu festival observing that it was nothing but a sport that inflicted cruelty upon animals.

In 2009, Tamilnadu enacted a law to regulate Jallikattu. The move was simply to request that the ban be revoked.

In 2013, PETA reported that despite the SC guidelines and Tamilandu Act, the cruelty towards animal during Jaliikattu continued. Instances such as making the bull consume liquor, injuring the tail of the animal to ensure it becomes excited and aggressive were not uncommon. PETA made a documentary and requested the SC that it be banned completely.

10 April 2014, Bulls were removed from the list and obviously for vote bank politics to ensure the support of rural populations.

The Supreme Court had directed that Jallikattu be held not more than five months a year but only after permission from District Collector. That bulls be monitored by Animal welfare board officers to ensure no steroids or performance enhancing drugs are given. That only 4 men against 1 bull, that no spectators be allowed in the ring. That double barricades be erected to protect innocent bystanders and medical treatment for wounded men and animals.

In addition to the SC guidelines the government directed district administration to ensure no unnecessary harm was caused to bulls. Organisers also have to deposit Rs.5 lakh and Rs.2 lakh for each death and serious injury case respectively. On May7, 2014, the Supreme Court of India banned the practice of Jallikatuu.

So what do you think? Should Jaliikattu be banned or regulated?