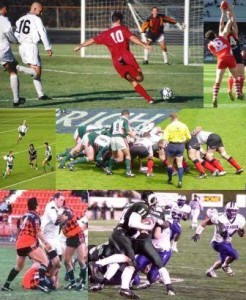 FIFA world Cup being held in Brazil this year is special for another reason which doesn’t involve football. The FIFA World Cup is also offsetting the carbon emissions that will surely be a pioneering step that could serve as a concrete lesson for future global events.

The CDM (Clean Development Mechanism) of the UNFCCC is being employed to encourage carbon credit holders for donations to event organizers which may then use it to offset emissions in multiple activities.

CDM allows a developed country with emission-reduction targets to implement an emission reduction/sink project in developing countries. These projects result into quantified emission reductions and can lay claim for Certified Emission Reductions (CERs). Each CER is equivalent to one tonne of CO2 and can be traded in international markets. The CDM is a part of the Kyoto Protocol which developed due to the United Nations Framework Convention on Climate Change (UNFCCC) that was created in 1992. Each year it hosts the Conference of the Parties (COP) in a different city around the world in order to debate and discuss the most effective ways to combat climate change.

The Government of Brazil has taken this mandate and has issued an appeal for such carbon credit donations to offset carbon emissions. FIFA also reportedly will be participating.

The donated CER’s however must originate from Brazilian CDM projects. Approximately, 14 million CER’s could be available for donation. Least accepted donated amount is 5,000 CERs. Donors will get recognition in the form of a certificate acknowledging their contribution.

More than 7,600 CDM projects and programmes in 105 developing countries have been approved till now.