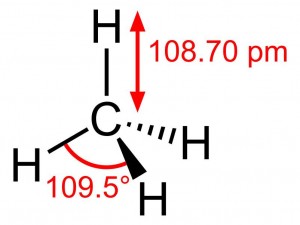 Methane (CH4) is an important trace gas in the atmosphere contributing significantly to long- wave radiation absorption emitting from the earth’s surface. It also affects the chemistries of both the troposphere and the stratosphere. Methane was discovered and isolated by Alessandro Volta (Italian Physicist) between 1776 and 1778.

Chemistry of Methane: Presence of carbon and hydrogen in the chemical formula of methane brought it under the category of hydrocarbon.  Methane is a gas with a chemical formula of CH4 with colorless and odorless properties. Methane is a principal component of natural gas and a significant fuel. Burning one molecule of methane in the presence of oxygen releases one molecule of CO2 (carbon dioxide) and two molecules of H2O (water).

Methane is a greenhouse gas with a Global Warming Potential (GWP) of 21. One cubic meter (m³) of Methane at normal pressure has a mass of 717 grams.

Global warming potentials of Methane: The rate of heat trapping by the greenhouse gas in the atmosphere is referred as a Global Warming Potential.  The concept of a global warming potential was developed to compare the ability of each greenhouse gas to trap heat in the atmosphere relative to another gas. The definition of a GWP for a particular greenhouse gas is the ratio of heat trapped by one unit mass of the greenhouse gas to that of one unit mass of CO2 over a specified time period.  Intergovernmental Panel on Climate Change (IPCC) has published reference values for GWPs of several greenhouse gases. Recent estimates for GWPs are listed in the IPCC’s 3rd Assessment Report.  As per the research data from IPCC’s third assessment report, it is concluded that, methane is 21 times more effective at trapping heat in the atmosphere when compared to CO2 over a 100-year time period. (Know more about this research)

Increasing anthropogenic activities like rapid industrialization, urbanization etc leads to increase GHG emission in the atmosphere. Higher GWP of methane made it a potent gas to absorb Earth’s long wave radiations being emitted from the earth’s surface. In addition, natural disasters like volcanic eruption, leakage from the geological deposits like natural gas fields release methane in the atmosphere resulting in higher GHG concentration.  All these activities lead to climate change and need mitigation actions. In 1997, growing concerns about the climate change led 184 countries to sign the Kyoto Protocol in historic city of Kyoto in Japan. Kyoto protocol suggests climate change mitigation mechanisms like CDM and JI.