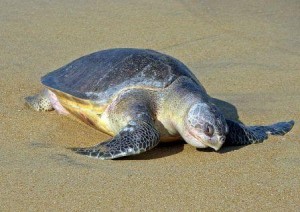 Odisha Government has imposed a seven month ban on fishing of the endangered Olive Ridley sea turtles within 20 kilometer across the river mouths of Dharma, Devi and Rusikulya in Gamjam district. The ban was imposed to protect nesting of the Olive Ridley Sea Turtles.  The ban will come into effect on 1 November 2013.

Odisha Fisheries department has also imposed the ban on motor boats, trawlers and mechanized fishing boats. The ban is also applicable on the patrols across the beaches of Gahirmatha, Rushikulya and Devi.

The ban was imposed across the 20 Kilometer area of the Dhamra-Rushikulya river mouth following the Sections 2, 7 and 4 of the Orissa Marine Fishing Regulation Act 1982.

The alternative livelihood project has been taken up by the Bank-funded Integrated Coastal Zone Management Programme.

The Olive Ridley sea turtle is known as the Pacific ridley sea turtle. It is a medium-sized species of sea turtle found in warm and tropical waters, primarily in the Indian and Pacific Oceans. It is a pelagic sea turtle and is generally known to inhabit in the coastal areas, which also include Bays and Estuaries. Since 1960, its population has been reduced by 50 percent as per the report of Marine Turtle Specialist Group (MTSG) of the IUCN.