Renewable energy is helping many countries to complete its economic transformation and achieve energy security.  Solar energy is one of the most abundantly available forms of energy that is be a solution to our everi ncreasing energy demand. The Earth receives 174 petawatts (PW) of incoming solar radiation in the upper atmosphere. Out of that, approximately 30% is reflected back to space while the rest is absorbed by clouds, oceans and land masses. There are very few technologies available to harness solar energy and convert it into usable form. One of the well known technologies is the solar photovoltaic cell.  It is a device that converts solar radiations into electric current using the photoelectric effect. A number of solar photovoltaic cells when electrically connected to each other and mounted in a support structure or frame is called a photovoltaic module. 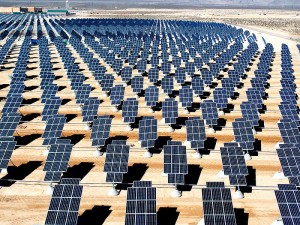 Solar PV projects are growing worldwide due to its nature of converting solar energy directly into electricity. It is also a good option where grid electricity is economically univiable. Although the cost associated with solar PV projects are high but project developers are still interested in solar PV technologies by considering the future expansion in the industry. Many governments are providing subsidies e.g. feed in tariff, generation based incentives and other benefits for solar projects. Recently India proposed National Solar Mission under its National Action Plan on Climate Change to promote solar energy in the country.

Solar PV projects are environment friendly and help in reducing GHG emissions that would have otherwise occurred due to the fossil fuel based power generation. If the Solar PV plant starts injecting electricity in the grid, it can help to displace equal amount of electricity that would have otherwise been generated from the GHG intensive grid (Most of the power grid have electricity from coal based power plants).  Hence such projects are also eligible to earn carbon credits under the Clean Development Mechanism (CDM).

You might be interested in in Solar PV system calculator. Calculate your solar system size and other details from here .