If the next world war happens; it may well be triggered by water scarcity across the continents. It has been already found that the third of the world is suffering from water shortages.  Increasing demand for water with rapidly growing rate of population, inadequate rainfall, uncontrolled use of water and climate change are some of the reasons behind it.

What is water scarcity?

“As per the UN estimate, water scarcity already affects every continent. Around 1.2 billion people, or almost one-fifth of the world’s population, live in areas of physical scarcity, and 500 million people are approaching this situation. Another 1.6 billion people, or almost one quarter of the world’s population, face economic water shortage (where countries lack the necessary infrastructure to take water from rivers and aquifers)”. 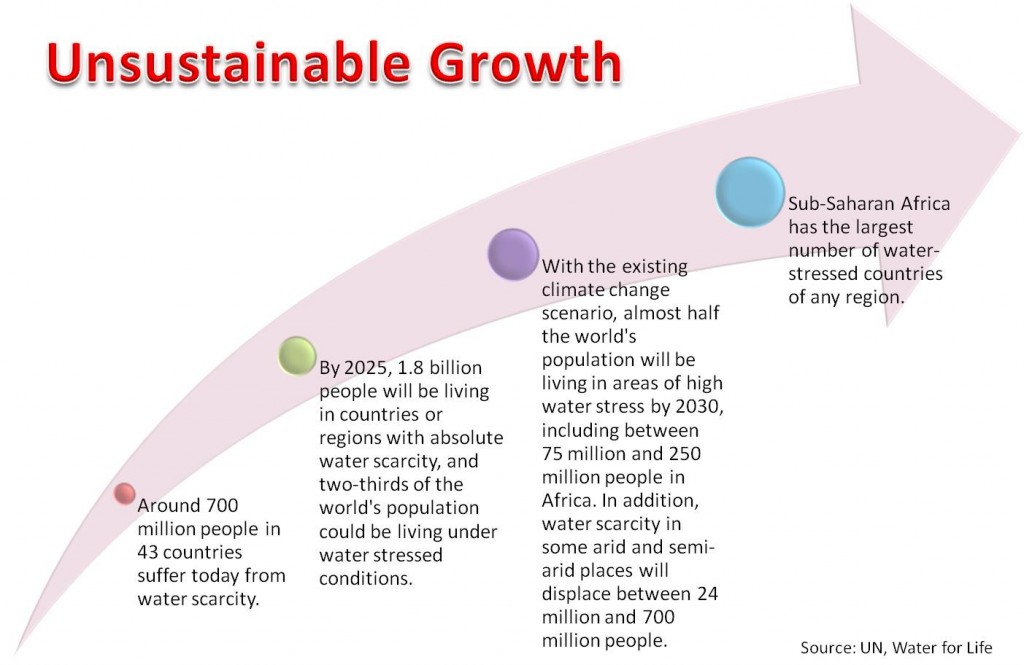 The thirst of water for India’s rapid development is growing day by day. In spite of adequate average rainfall in India, there is large area under the less water conditions/drought prone. There are lot of places, where the quality of groundwater is not good.  Another issue lies in interstate distribution of rivers. Water supply of the 90% of India’s territory is served by inter-state rivers. It has created growing number of conflicts across the states and to the whole country on water sharing issues. Some of the major reasons behind water scarcity are;

Rainfall is the major source of water: India receives most of its water from south-west monsoon which is the most important feature controlling the Indian climate. There is about 75% of the annual rainfall is received during a short span of four months between June to September. As far as rainfall distribution over the country concern, it shows large variations in the amounts of rainfall received by different locations e.g. the average annual rainfall is less than 13 cm over the western Rajasthan, while at some part of Meghalaya it has as much as 1141 cm. As per the Indian Metrological Department, India’s annual rainfall is around 1182.8 mm. Out of that, the mean rainfall of south-west monsoon between June to September is around 877.2 mm and contributes 74.2% of annual rainfall. (Know more about water availability in India)

Why should India address water scarcity?

India’s population is expected to increase from 1.13 Bn in 2005 to 1.66 Bn by 2050.  Out of that the urban population is expected to grow from 29.2% of the total population in 2007 to 55.2% by 2050. First and foremost result of the increasing population is the growing demand for more food-grains and allied agricultural produce. It results in expanding area of land under the crops especially high yielding crop varieties. It is estimated that the production of water-intensive crops is expected to grow by 80% between 2000 and 2050. For example Rice, wheat and sugarcane together constitute about 90% of India’s crop production and are the most water-consuming crops. In addition, states with the highest production of rice and/or wheat are expected to face groundwater depletion of up to 75% by 2050. (Facts and figures are sourced from: Grail Research)

Another area of concern is the water Intensive Industries. India’s economic growth has been gargantuan in the last decade. Foreign direct investment equity inflow in the industrial sector has grown to $17.68 Bn in 2007–2008. Steel and energy sector will need to keep pace in order to fulfill the demands of sectors like manufacturing and production. Annual per capita consumption of power is expected to reach its maximum level as compared to present installed power generation capacity. As per the ministry of power, thermal power plants which are the most water-intensive industrial units, constitute around 65% of the installed power capacity in India.  Industrial water consumption is expected to shoot up its growth between 2000 and 2050. (Facts and figures are sourced from: Grail Research)

All of this will result in increased consumption of water. That is why there is urgent requirement to address the issue of water scarcity in India to make better policy decisions which will affect its availability in future. .  If the conditions remain same; water will turn out to be the world’s most precious resource soon.