Let me confess beforehand. I am completely in favour of GM (genetically modified) crops so if anybody feels this article is a bit biased and one sided, then so be it. You are free to write a counterview and I will publish it without edits. I am not a trained biotechnologist by profession but then I see many untrained activists crying foul over what is definitely a good technology, so I have every right to speak in favour of it. While the over hyped protests of certain NGO’s can get media attention, they fail to explain why they are against GM crops. You can’t put a stop to GM crops by climbing towers, it will only get you some attention which will also fizzle out in the end but we are a democracy and if the activists think that it is the right way to protest, then good luck to them.

A GM crop is a technology, as simple as that. It is no more than a scientific technology. Technological advancements are always good and never bad unless of course if you implement them in the wrong manner. If we have to protest, we can protest about the manner in which GM crops are sought to be implemented in India but in no way can we protest against the very technology itself. If however, you are against technology then you should also be ready to explain why you use a mobile phone in spite of the threat of radiation or any antibiotic medicine in spite of the side effect such medicine may have. 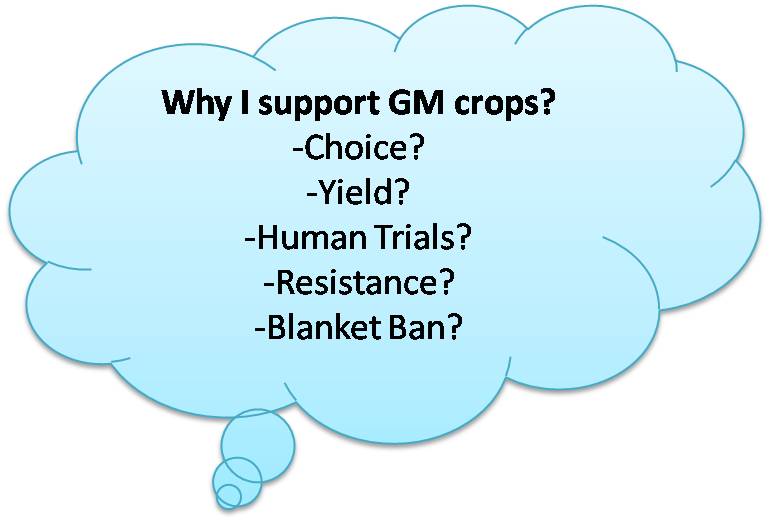 There are countries where GM crops are consumed and the citizens have a life span which is much more than the average life span of an Indian. If they are so harmful, would they not be dying at a much younger age? These are legitimate questions which should be answered by opponents of GM crops.

Another argument I come across very often is that GM crops have shown no major improvement in yield. This shows a failure to understand the very nature of technology itself. GM crops are not always released with a view to improve yield. There may be additional traits of improvement such as resistance against diseases or drought resistance. Yield increases automatically if we protect the crops against diseases.

A legitimate issue is perhaps of the question of choice. Since GM crops cannot be differentiated from ordinary crops, a consumer cannot refuse such crops when they are released into the market on the basis of visual observation alone. But this same argument can also be used by farmers. Why are we refusing a farmer the right to cultivate such crops if he wants to? A right manner would be to make crop labelling mandatory and leave the choice to the consumer. There is enough market for both conventional and GM crops.

If you are a sceptic and live in perennial fear of catching a deadly disease by consumption of such crops, let me tell you that every modern day crop is in fact a modified genetic version of its wild relative. GM technology simply achieves at a faster rate what nature has done by natural mutation and selection over hundreds of years. You will be surprised at how many GM organisms are at work behind the scenes in our food industry, the end products of which we consume while consuming everyday products.

The best way to allow GM crop cultivation would be to carry out comprehensive human trials which companies are shying away from at present, increasing scepticism in the minds of the consumers but to declare a blanket ban is not the right way to go about it. We invested in technologies that people were sceptical of and it has made life much better for us. Let’s face it; the sceptics never gave us the Television or the AC current. It was the result of countless hours of research.