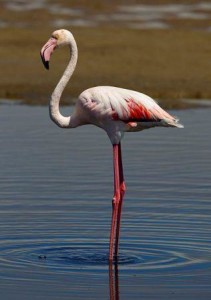 World’s oldest flamingo known as Greater died at the age of 83 on 30 January 2014 at Adelaide Zoo of Australia. Greater was brought to the zoo in 1933 and lived long with the Chilean flamingo named Chilly, who is in his 60s. Chilly is the only remaining flamingo in Australia.

The world’s oldest Flamingo was the last Greater flamingo that has resided in Australia. It’s known that the lifetime of the flamingos is of about 25 years in the wild but they can live for many decades in captivity.

The Greater Flamingo scientific name Phoenicopterus roseus is the most widespread species of the flamingo family. These birds are found in the Africa, southern Asia (India and Pakistan), Spain, Albania, Turkey, Greece, Portugal, Cyprus, Italy and France. A single bird was seen in 1988 on the North Keeling Island.

These birds are pink birds and found mainly in tepid and watery regions as well as in the environment of saline and alkaline lakes. The Greater flamingos are the only tall pink bird found anywhere. They also have long, lean, curved necks and black-tipped bills with a distinctive downward bend.