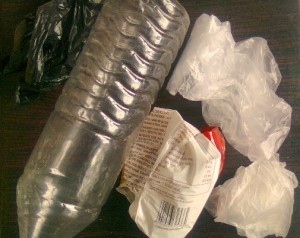 One of my friends inspired by the environmental movement; ordered recycled paper from a reputed firm in his city. Imagine his surprise when the so called recycled paper arrived in shiny, plastic packaging.

“Isn’t this harmful for the environment?” asked my friend. “What is the use if they pack it in plastic? All the effort that has gone into this recycled paper is down the drain.” He did have a point.

I then noticed that around us many items come in plastic packaging. It’s cheap, more durable, makes transport easy and preferred by both the consumer and the manufacturer. While governments have been extra vigilant about banning the use of polythene bags, plastic packaging has slipped under the scanner. From potato chips packets to milk pouches, there is plastic everywhere.

Himanchal Pradesh has banned use of polythene for non- essential eatables such as candy and chips packets. The ban will be effective from July 1. This is a good step as in any case, these are junk food items and not essential goods.

Firms will now have to provide these in biodegradable packaging that does not harm the environment. The Plastic Waste (Management and Handling Rules) Rules, 2011 have banned plastic carry bags that are less than 40 microns. Use of plastic sachets in ghutka industry was also banned.

High rates of taxation could serve as another useful deterrent. Imagine the same pulse being sold in a plastic bag and a paper bag. If the plastic one is taxed and costs Rs. 20 more, which one will a customer buy? Maharastra, Dehli, Punjab, Rajasthan, Goa, West Bengal and Himanchal Pradesh are some states that have banned the use of plastic bags. The super market that I go to in Delhi complies with the ban on plastic carry bags. Initially, there were a few hiccups and customers complained but now everyone’s adjusted. Customers carry their own bags and the sky hasn’t come crashing down on us because of lack of plastic carry bags. The only reason customers use plastic bags is because the shopkeepers provide them with. Once a phase out is done, lifestyles can be easily adjusted.