Climate change impacts on biodiversity are already evidenced by shifting migration ranges of insects and animals, modified flowering and fruiting cycles and species extinctions. Other impacts including floods and storms are more severe, and heat waves are becoming more extreme. Thus, there is urgent need of remedial measures to lower down the CO2 level.

Understanding Carbon Sequestration: Releasing and absorbing green house gases such as carbon dioxide and methane by the terrestrial (on the land masses of continents and islands) ecosystems play an important role in the ecological cycle. In addition, storing large quantities of carbon in living vegetation and soils leads to significant global carbon sink.  Plants remove CO2 from the air and convert it into sugars (carbon compound) that requires for their growth and development.  CO2 derived products such as lignin and cellulose constitutes the body part of the plants and exists in large quantities in woody tissues of trees and shrubs.  Hence, as long as these plants are alive and growing, they actively remove carbon from the air around them.

Bamboo is woody grass belonging to the sub-family Bambusoideae of the family Poacae. Bamboos also play a very important role in carbon sequestration. Bamboo is known to be one of the fastest growing plants in the world.  It’s growth rate ranging from 30-100 cm per day in growing season. Bamboo captures and stores (through the process of carbon sequestration) biomass quickly and creates opportunity to maintain and increase carbon stocks in its biomass. 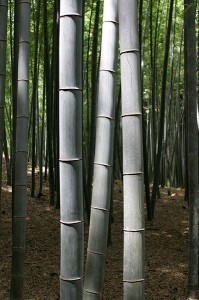 Microorganism cycle triggers the process of plant growth and subsequently carbon sequestration process. They can fix CO2 by light driven (Photoautotrophy) and geochemically driven (Lithoautotrophy) reactions. Soil micro-organisms, especially Arbuscular mycorrhizal fungi (AMF), have well-known roles in terrestrial ecosystems. AMF can constitute a physiologically important carbon sink. At the ecosystem scale, AMF become important through their effects on soil aggregation in which organic matter is the main binding agent. Soil aggregation, in turn, has important consequences for soil carbon storage.  Mycotrophic nature of bamboos and their association with Endomycorrhizae help in maintaining the soil carbon that is trapped in soil aggregates supported by glomalin (Glycoprotein produced abundantly on hyphae and spores of arbuscularmycorrhizal fungi). The amount of sequestration depends on land-management practices, edaphic factors, climate and the amount and quality of plant and microbial inputs.

Glomalin helps to bind soil particles together. Glomalin contain 30- 40% carbon and can last for 40 years. It also forms aggregates that add structure to soil and does not dissolve easily in water. These properties make glomalin a good protector of hyphae and soil aggregates.  Therefore symbiotic relationship of bamboo-mycorrhizae can reduces carbon emissions as a sink and subsequently provides mitigation opportunities for climate change.

Know more about live research on the same topic