As various countries meet to decide on the future roadmap for fighting climate change and prevent global warming, it will be worth watching out whether the representatives of various states can bury the hatchet and give the people a good, solid climate treaty. In my opinion, it is not going to happen, at least not in Durban.

There is no real consensus on the future of the Kyoto Protocol. Even nations like Japan and Canada who were at the forefront last time have backed out. Some of this has to do with the fact that the UNFCCC has not penetrated each and every developing nation; the CDM largely remains limited to India and China. Developed nations that took binding cuts have realized that they have become laughing stocks with no real benefits except the goodwill it earned them while India and China whose pollution levels are increasing as they industrialize are not taking any cuts at all and getting benefits out of Kyoto. It doesn’t help that USA is not a part of Kyoto which is also one of the biggest polluters that never ratified the protocol and thus never took any binding cuts.

The Kyoto Protocol was a landmark agreement established on the principle of “common but differentiated responsibilities.” Much has changed since then. The global recession has put survival in the minds of every nation with developed nations wanting the principle of fairness- all major polluters to shoulder responsibility before they agree to any cuts at all. 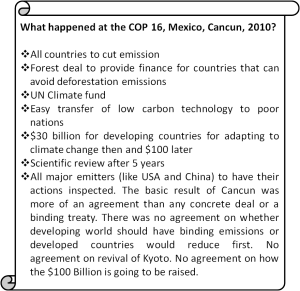 Climate Change is not like any other treaty which can be procrastinated for long. You may keep border disputes unsettled but Climate treaties want action and it needs to happen now. Whether you support global warming or are a sceptic, you cannot argue that we must take steps to mitigate climate change. Let me explain it this way. If you believe in climate change (I say believe because if you ask me to convince you scientifically, I might not be able to) then all the more reason for mitigation but even if you are a sceptic or don’t believe at all that the temperature is rising, even then what is the harm in cleaning our planet and reducing our pollution levels. I wish the heads of various countries look at it this way. Unfortunately, climate talks have earned notoriety for backroom maneuvers and arm twisting by richer nations.

Each country is now presenting its own hardened stance with none willing to back down. On a lighter note, at least the US position doesn’t need much discussion as it has (right from day one) always been against any cuts unless developing countries take responsibility. With elections round the corner in US, Mr. Obama won’t be agreeing on any cuts, even if we assume an extremely optimistic scenario in which the US comes on board, such a treaty would not be passed by the congress.

Let us briefly see how other nations are poised-

Japan and Canada- These two nations were at the forefront last time. In fact, the then Japanese leader famously went to his office minus the coat so he wouldn’t need the A.C. thus setting an example for his countrymen. It was largely Japan’s efforts and nations like Canada that saw the Kyoto Protocol coming into picture. Both nations have categorically refused to be part of any climate treaty unless developing countries agree to emission cuts.

BASIC Group- India under Mr. Jairam Ramesh changed stances but has finally hardened its position and refused to shoulder any responsibility unless countries like US takes some load. India and china are two nations that would like a Kyoto Protocol-2 since both have a huge market under the mechanism. However, their strategy at current is to keep pushing nations such as Japan, US, Canada and EU to agree to a second commitment period. They may finally agree to some cuts in the end if there is no other hope. Both countries positions will be interesting to watch as a second commitment period will definitely benefit them. In some ways, India, China and Brazil have ensured more hunting space for themselves and greater clout by uniting under the banner of BASIC. South Africa would have to do a tightrope as it is a part of BASIC but at the same time since the conference takes place in Durban, it would have to ensure the conference comes out with some positive outcome otherwise the blame for failure might come onto them.

European Union- The EU’s position is more liberal in a sense that it also wants some solution and doesn’t vehemently oppose a second commitment period but wants others to shoulder responsibility. The EU naturally wouldn’t want to bear the climate burden on its own when no other developed country is willing to do so.

Alliance of Small island states: There position is perhaps the most vulnerable as their very existence is threatened by climate change. Their interest mainly lies in protecting their very survival and not any potential market for CDM as they will be most impacted in the event of rising sea levels.

African Nations- They don’t pollute much and have not much benefited from technology transfer either. They would want a treaty in which they get some aid to mitigate the effects of climate change and are not be burdened with any cuts.

When I was a child, my football coach always told me that no matter how well you play, you cannot score a goal exactly the same way twice. Although theoretically possible, it is impossible in reality. I think a similar principle would apply to Kyoto.

I think the best case scenario for India and China would be to push for the developed world to take cuts and keep pushing till the last possible minute, create a consensus, get the developing nations on your side and push harder. But if such a strategy doesn’t succeed, then maybe accept some cuts as a last resort; it is better to have a second Kyoto with binding cuts for all than not having any Kyoto at all. I think this is what both nations have been doing till now. Let’s see, what Durban gives us. Nobody wants another Cancun which perhaps only a die hard optimist would call a success.