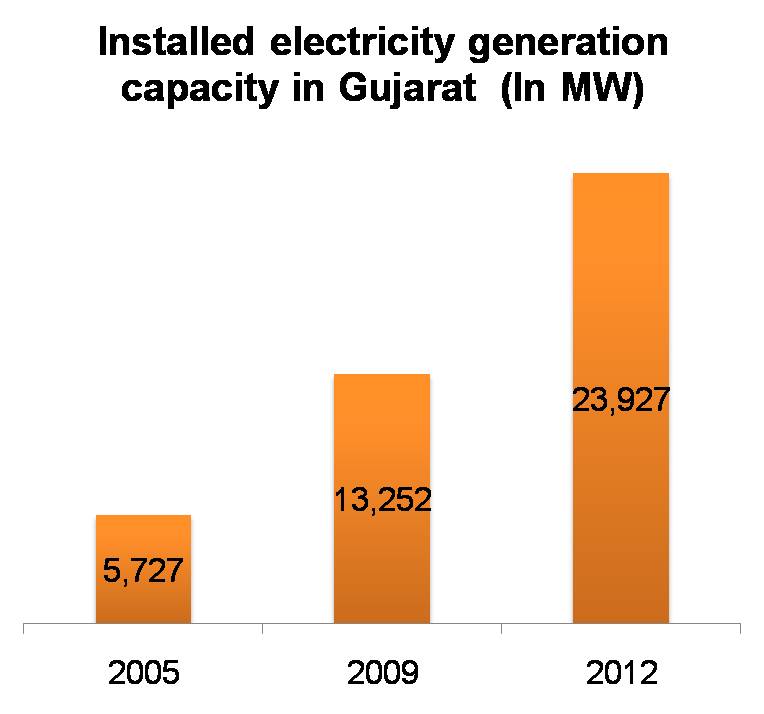 The Indian power sector is facing challenges despite the significant growth in generation capacity over the past few decades. The power situation in India is characterized by demand in excess of supply, high transmission and distribution losses, peak demand and energy shortages, low plant load factors, and decreasing availability of best quality fuel to run the power plants. However, over the last few years, Gujarat has successfully crossed all these barriers. Gujarat has become successful in securing its overall energy requirements with an installed power generation capacity of 23,927 MW (as of  Aug 2012).

The institutional structure of the power sector in Gujarat

All six companies are 100% subsidiaries of GUVNL.  The GUVNL is engaged in Supervision, Co-ordination, and facilitation of the activities of its six Subsidiary Companies.

As a result of growing installed power generation capacity, the peak demand-peak deficit in the state has decreased by the Compound Annual Growth Rate of 31%.

The actual power supply position of the state of Gujarat has improved in the last seven years considerably. The power requirement and availability deficit in the state have been decreased by a CAGR of 38%. The year 2012 shows nearly zero percent deficit made Gujarat power sufficient.

Gujarat is rich in solar energy, biomass, and wind energy. It is also the leading state in terms of overall solar energy installation in India. As part of its renewable energy promotion policy, Gujarat enacted the country’s first Wind Energy policy in 1993 and become the first state with a Solar Policy in 2009. As per the Gujarat Energy Development Agency (GEDA), the state has tremendous renewable energy potential;

Table showing renewable energy potential of the state of Gujarat;

Increasing power generation capacity in each year along with the growing share of Renewable energy in its total energy mix has made Gujarat a prominent destination for investment.  Gujarat government is positively looking towards renewable energy which reduces dependency on conventional fuel. Let’s hope for a similar model in other parts of the country.

Read more on Summary of Incentives and Subsidies for Renewable Energy Products by MNRE.