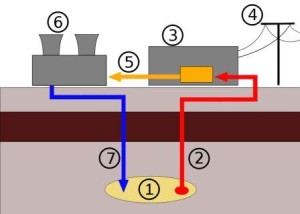 According to reports, Gujarat is planning to explore options in the field of geothermal energy. This is one particular area in which India hasn’t really explored enough options.

The central government is also moving forward and will soon come up with a policy (already in draft stage) on the exploration and tapping of geothermal energy in India. Geothermal energy produces very little waste, and is completely renewable as the earth is continuously being heated.

Geothermal Energy is generated due to the natural decay of radioactive elements inside the earth. A temperature gradient is thus formed which results in energy release. Geothermal Energy can be used for electricity generation, for heating up homes and buildings, for drying applications in industry and sterilization etc.

Like other renewable sources of energy, geothermal power plants do not require use of a fuel that is susceptible to price fluctuations.

Existing geothermal plants currently are generating electricity from 0.05$ to 0.08$ per kilowatt hour (kwh). Considering the lifetime of a power plant, geothermal energy can recover costs. Initial explorations for a suitable location and drilling expenses increase the total cost. Add to that the fact that other renewable sources chiefly wind, solar and hydro have already been explored and the R&D choices are at an advanced stage, sometimes geothermal energy is ignored in view of other popular energy sources.

India is said to have an estimated 10,600 MW of potential in the geothermal provinces.

The National Geophysical Research Institute has undertaken studies to identify potential sites for exploration in the country. States like Jammu & Kashmir, Uttarakhand, Andhra Pradesh, Chhattisgarh, Maharashtra, Gujarat and West Bengal are said to be at the frontrunners for harnessing geothermal energy and utilize this resource.

Read more on Geo-thermal energy and its potential in India