If you’re a fan of fish or shellfish, then you should learn the term “aquaculture” if you don’t know it already. You may be able to surmise that it’s akin to agriculture, which is farming on land. Aquaculture refers to farming in the ocean — or, more accurately, beneath the waves. Perhaps you didn’t realize that much of the seafood you eat comes from aquaculture experts and their fish farms, as opposed to the wild. But it’s actually a good thing that the majority of seafood in circulation isn’t wild-caught. 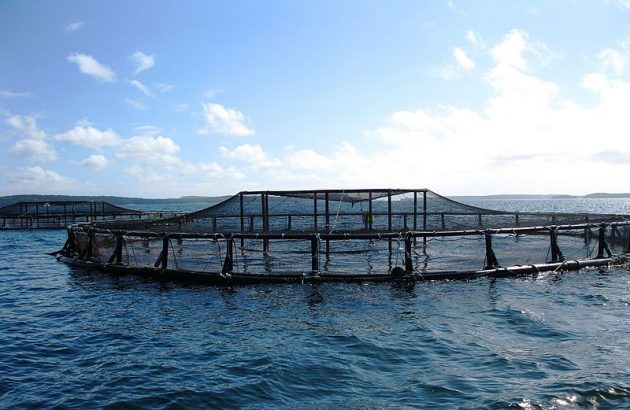 While fish and shellfish harvested in the wild may deplete the native supply of sea creatures, aqua-farms offer a more reliable model for fishing without sacrificing the quality of the food. What’s more, as aqua-farmers learn more and more about the practice, they’re enlisting techniques that are not only sustainable — they may actually have the power to reverse (or at least greatly slow down) climate change. And their methods are simple, all natural and easy to replicate in almost any aquatic climate.

Do we have your attention yet? The answer to stopping global warming in its tracks could already exist just beyond the shoreline of your favorite beach. Researchers are already starting to theorize about the far-reaching effects that aquaculture could have if the world embraces it with open arms. So keep reading to learn more about what aquaculture has to offer to the environment and how it might show up in your own community (or supermarket) soon — in fact, maybe it already has!

Off the shores of New Haven, Connecticut, in the Long Island Sound, a farm exists where sea plants and sea creatures both flourish alongside one another, in perfect harmony. Bren Smith’s Atlantic aqua-farm cultivates seaweed, mussels, scallops, and oysters. But there’s something a little bit special about this combination of aquatic flora and fauna. The components work symbiotically to make the undersea environment healthier as they all happily thrive beneath the waves.

The seaweed — or more specifically, kelp — sucks the carbon dioxide out of the water. Since carbon dioxide is acidic, the removal of this gas helps to de-acidify the water. This, in turn, allows the shellfish to flourish in waters that would otherwise be uninhabitable to them. Smith not only sells his crop of seafood to purveyors but also reaps and sells the kelp itself, which is used as feed in agriculture. This organic, sustainable model leaves behind a healthier ocean, unlike many methods. And it’s totally replicable.

Case in point: another example of sustainable aquaculture exists more than a thousand miles away in the Caribbean. Jimmi Jones runs a similar operation with his wife in Jamaica. Jones, however, raises fish and typical vegetables. His fish tanks channel water and nutrients to the garden plants. The plants, in turn, filter the water and return it to the fish tanks. The result? A thriving fish farm and produce farm. Dubbed the JimSan Aquaponics approach, it has earned such acclaim that Jones travels to teach his techniques.

Seaweed and other aquatics plants don’t just remove gases from the water, they can also draw carbon dioxide from the air. If you’re familiar with the concept of climate change, then you know that so-called greenhouse gases like carbon dioxide can harm the atmosphere when they’re created in excess. So increasing the amount of seaweed that’s flourishing in the ocean wouldn’t just offer more opportunities for aquatic farmers, it also has the potential to slow global warming.

In fact, some species of seaweed are exceptionally more effective at filtering out carbon dioxide than plants on the land — they’re capable of absorbing five times as much carbon dioxide as your typical land tree. What’s more, seaweed grows at an exceptionally rapid pace. In the span of three months, kelp can reach lengths of up to 12 feet. So farmers would see a return on their investment very quickly, not only in terms of environmentally friendly effect but also in terms of harvesting and selling their sea crops.

As seaweed sucks eco-unfriendly gases out of the water and the air, it also has the potential to decrease the amount of carbon dioxide being emitted in the first place, potentially compounding the effects of its filtration. Seaweed might be the new wave of clean fuel that the earth needs in order to survive the next millennium and beyond. It’s looking increasingly likely because of one simple fact: seaweed is about 50% oil, and that oil is incredibly versatile.

The oil extracted from seaweed could be converted into fuel for your car, for a train, or for an airplane. Early research says that the process to create fuel from this raw material could be four times faster than the process in place to make biofuel currently. What’s more, a certain extract from algae could actually increase the life of lithium-ion batteries. And best of all, growing and harvesting seaweed isn’t nearly as hard on the environment as cultivating comparable forms of fuel.

Whereas land-based crops necessitate practices that harm the earth, such as clearing land for farming and using polluting fertilizers, seaweed doesn’t. It also doesn’t require equipment that burns copious amounts of fuel and releases greenhouse gases into the air. The high yield of a single seaweed plant means that to fuel the entire U.S., only about 10 million acres of seaweed would need to be planted — a fraction of the current acreage of land-based biofuels. All the while, seaweed soaks up carbon dioxide.

There’s a specific term for the seaweed fields that soak up the harmful gas (and other things that absorb it): carbon sinks. These carbon sinks are a major win for environmentalists because they decrease the effects of greenhouse gas emissions — including global warming, which has begun to negatively affect those who sail in search of wild-caught fish by changing the migration patterns of sea critters. So seaweed could solve multiple problems for anglers, even those who continue to line-catch wild prey.

Even if you removed certain factors that make agriculture harmful to the earth, like the toll commercial farming takes on the land and the greenhouse gases that farming equipment usually emits, there would still be one major problem: water. When you farm on the land, you have to use major amounts of water in order to cultivate healthy crops. When your crops already live under the water, however, and are capable of actually filtering it themselves. That’s a totally different story.

True aquaponic farms that float in the sea obviously require no irrigation. They have everything they need already in the water. And remember Jimmi Jones’ more traditional fish and vegetable farm in Jamaica? Despite the fact that Jones provides the water himself, as opposed to enlisting the ocean waves, his water use is drastically different than that of a farm on the land. Comparatively, Jones and his crops use 90% less water than an agricultural farm.

Perhaps you’re wondering how aquacultural farms could ever possibly produce the way that agricultural farms do — or turn a profit, for that matter. Believe it or not, aquaculture has the potential to be far more productive than agriculture. It’s estimated that a properly structured aquacultural farm, created using a sustainable and symbiotic model, could create 10 times as much food as its land-locked counterpart. And this is all while avoiding pesticides and other substances that harm the earth.

If you’re skeptical about this stat, turn your attention to continents that are already leading the way in the world of aquaculture, Asia and Africa. Asia boasts a booming fish farming and aquaculture industry, the biggest in the world. It exports a whopping 60 billion tons of water-farmed foods on an annual basis. If this isn’t evidenced strong enough to convince you that aquaculture works, probably no statistic will be. And it’s not just Asia that’s making major waves with fish farming and aquaculture. Africa isn’t far behind.

The impetus for growing the fish-farming industry was two-fold in Africa: to improve its inhabitants’ nutritional status and to give the economy a boost. As the concept of aquaculture continues to grow across Africa, both goals are moving closer to fruition. More and more jobs pop up every day, thanks to an increase in fish farms, and therefore the economy thrives. There’s a wider availability of fish to eat, which is rich in healthy fat and protein, so the residents of fishing communities benefit physically, too.

With so many benefits of abandoning the traditional agricultural model and transitioning to aquaculture, you probably only have one question left: what are farmers waiting for? If the global community were to embrace the concept of hydroponic crops, it could potentially change the course of history. Or, more accurately, it could ensure that the earth exists long enough to create more history. So keep an eye out for aquacultural products at your grocery store and make an effort to purchase them when possible.