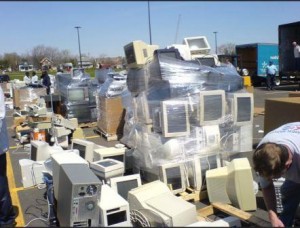 The European Commission defines waste as” any object or substance that is intended to be discarded”. Disposal and recycling have been an ancient practice and aimed to balance out the times when resources have been scarce. In this world of technology, electronic equipment and gadgets have come up to be an important part of the global waste disposal. While manufacturers are readily coming up with newer versions of the same gadgets, we, the consumers are eagerly dropping off our old and used electronics to be replaced with new ones. So, where do these discarded things go? Statistics suggest the average phone users gets himself a new device every 18 months. This has resulted in the United States alone tossing a minimum of 100 million cell phones to their trash bins every year. For the same country, more than 112,000 computers are discarded everyday according to the EPA.

While the above facts are alarming, electronic waste is much more than cell phones and computers. Add to it old TV sets, printers, cartridges, chips, circuit boards, batteries and the resulting amount of e-waste would be enough to pollute our Earth many times over. Nearly 20 to 50 million metric tons of WEEE Waste Electrical and Electronic Equipment) is disposed off every year across the globe.

What if we said that a large amount of what is being labeled as e-waste / WEEE isn’t waste actually? A lot can be reused, recovered, recycled and remarketed from discarded electronic equipment. The most common gadget in our lives today – the cell phones – contain a high amount of special and precious metals like gold, silver and titanium! Going back to the statistics again, Americans alone dump $60 million worth gold and silver every year when they throw their phones into the trash.

Well, saving resources is one thing, but when we dump these metals and other chemicals into the earth, imagine what would happen. 70% of kids in Guiyu village of China have an excessive amount of lead in their bodies, wherein 82% have been tested positive for lead poisoning. With landfills increasing, our drinking water is getting contaminated and people of Guiyu would have to truck in water from far-off towns. The main components of E-waste include aluminum, copper, mercury, arsenic, lead, lithium, selenium, PVC, chlorofluorocarbons, PCB, cadmium, toner dust and even americium (a radioactive substance used in medical grade and sensory equipment). Each of these elements is highly hazardous and coming in direct contact can be fatal to life. Sent to landfills, these find a way into our farms, water table, and air. Electronic waste has been making our earth more polluted and toxic than it had ever been.

Proper WEEE disposal is the only solution at hand. Grading and recycling of E-waste don’t just saves resources and energy but also makes this earth more habitable, both for us and the wild animals and plants we ought to share this space with. WEEE recycling also helps answer the rising climatic problems we have been trying to fight in the past decade. Recycling will mean less carbon and less carbon amounts to fewer greenhouse gasses and leading to making our earth more tolerable. Also, when you go on to extract fewer resources from the heart of the earth through mining and drilling, it’s needless to say that we are encouraging a longer coexistence.

Katie Baker writes on behalf of Eco Green IT Recycling, a company which provides electronic waste recycling solutions. In this article, she explains how WEEE disposal is beneficial for the environment.