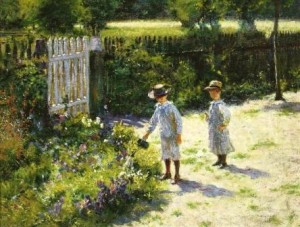 Children are always on the lookout for something exciting to do, or to attempt an activity they’ve never had the chance to partake in previously but one has been on their doorstep all of their lives. Literally. Gardening is the kind of pastime regularly overlooked by children, and their parents, when actually it has proven to be highly beneficial both in terms of their education and recreation.

In recent times, increasing numbers of schools have been trying to adopt a policy whereby they teach children about the kind of things they might find in their gardens from flowers to insects, helping them to understand topics such as pollination and how certain creepy crawlies actually have benefits to our gardens and aren’t the nuisances many perceive them to be.

Despite the clear educational benefits, some parents have been skeptical of these plans and believe it’s just getting their children cold and muddy or putting them at risk of being bitten or stung by insects. There are certainly valid arguments on both sides, with the obvious advantages of being able to get outside and learn about nature being one; while spending time in the classroom learning about core subjects such as English, maths and science is deemed more important by others.

Garden Buildings Direct, an online retailer specialising in sheds, log cabins and garden storage, recently produced a blog in which they revealed some highly valid reasons why gardening is great for kids; one of which being the cognitive benefits, something that was revealed previously by the Royal Horticultural Society. The RHS stated that gardening actually “increases children’s alertness and concentration levels; and can even help to prevent ADHD.” With that in mind, it can be highly beneficial to the child – especially while at school – as the lessons learned out in the school garden will transfer back inside the classroom, helping them to get rid of that excess energy that often causes them to lose focus in ordinary lessons, and enabling them to knuckle down with their work.

The children will also get the chance to interact with other classmates who they might not normally work or play with. If they have their own friendship circles who they sit with in lessons and play football with at break times, for example, they’re not going to associate with other children all that much. However, outside in the school garden they might get the opportunity to work with other kids and get to know them by digging together or comparing what flowers or insects they’ve found proving that gardening is a highly sociable activity too, something that can be taken into adulthood when they may choose to have their own allotment, for instance.

There are, of course, also plenty of physical benefits associated with gardening. It’s great as a parent when you’re able to sit the kids down in front of the television or games console, or when you get them to sit with a book but they’re not doing anything physical. By getting them outside and moving around, it will help to develop their bodies and muscles which will also use up energy that they’ve developed during the day, (and why you can’t get them to go to sleep at night!)

Also, what better way is there to encourage them to eat healthily than growing their own fruit and vegetables in the garden? While they may look disgustedly at their plates filled with broccoli and salad, it might have a completely different outcome when the children have been out in the garden and pulled the vegetables from the ground themselves and seeing those very same vegetables on their plates within the hour.

Author bio – Chris White is a freelance writer specialising in home, garden and DIY content; aiming to help readers understand the challenges and possibilities that come with all DIY projects