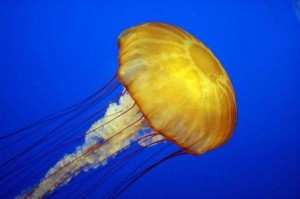 As per the data collected by researchers, concentration and density of jellyfish is very high in this lake. The team was led by wildlife scientist BC Choudhury associated with the Wildlife Trust of India. The team found the lake on one of its visits in Armabada in Gujarat.

The bottom portion of the lake, which is spread over 5-6 hectares, was found to be full of ‘upside down jellyfish’.

“This is probably the first jellyfish lake to have been found in India. The concentration and density of jellyfish is very high here. You can even see them from outside during low tide and when the water is clear,” said BC Choudhury.

“They position themselves on their bottom side to receive maximum sunlight as they harbour photosynthetic algae called Zooxanthellae, which have a symbiotic relationship with jellyfish similar to corals,” said marine biologist S Goutham.

Jellyfish habitats exist in several parts of coastal India but are rarely seen in lakes. Eil Malk Island in Palau is world’s renowned jellyfish lake. Palau is an island country that is in free association with the USA and is located in the western Pacific Ocean. This Jellyfish Lake is connected to the ocean through fissures and tunnels.

Jellyfish are found in majority of oceanic bodies and occupy a range of habitats including the surface to the very deep sea. Also found in freshwater but are more common in coastal areas.