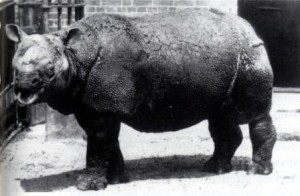 The Indonesian Government announced to build a latest sanctuary in a new measure to protect the World’s rarest Javan rhinos. The new sanctuary will be carved out of the Ujung Kulon National Park.

It will encompass 12,600 acres of lush rainforest, freshwater streams and mud holes in the park.

In Indonesia Javan rhinos are locally termed as Abah Gede or the Great Father.

As per the latest report of the International Union For Conservation of Nature (IUCN), decline in the strength of rhino’s had reached to the level of extinction. There are thought to be only around 50 of the rhinos in existence.

Poaching in particular represents a severe threat, with rhino horns used in traditional Asian medicine. It fetches higher prices in the black market despite a lack of scientific evidence showing horn has any medicinal value.

Countries including Indonesia, Nepal and India, have pledged to take steps to increase their rhino populations by three percent annually.