Conventional sources of power like coal, nuclear power, gas and oil will continue to be the bed-rock of energy supply for the foreseeable future. In the last decade however, wind and solar power have picked up tremendously to bring about a new wave of energy. Storage promises to complement existing sources of energy and add to their effectiveness, especially Renewable Energy. It is the next step in arriving at a reliable, sustainable and consumer friendly energy supply system.

THE NEED FOR STORAGE

In recent years, the share of infirm power sources such as wind and solar in the grid has increased continuously. To facilitate further growth of renewable energy as well as to iron out gaps between demand and supply, energy needs to be stored.

Storage technologies have wide applications – in Generation, Transmission and Distribution as well as on the premises of consumers. Generators and distributors could make use of these technologies to address spikes in demand and provide reliable power output. Consumers could use energy storage devices for supply of electricity during load shedding and peak times when cost of electricity is high. 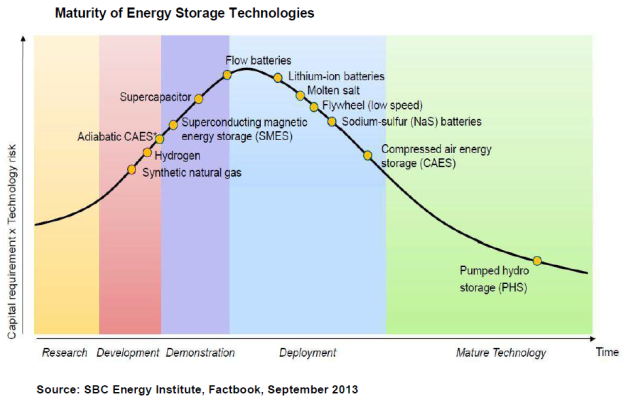 Storage technologies have different characteristics of energy storage and conversion. So far only pumped hydro storage technology has been fully commercialized. Other technologies are being demonstrated or are in the pre-commercial phase. Advanced batteries that are safe, low-cost, and efficient have emerged in the last few years. These batteries are expected to be used by utilities and remote location applications in coming years.

Utility scale  California has incorporated regulations to mandate Public Utilities to add 1.3 GW of energy storage to the grid by 2020. This capacity has been divided into transmission-side, distribution-side and consumer side projects. The purpose of these regulations is to develop a market for these technologies.

Industrial-scale energy storage Utilities charge industries for number of units consumed (“Energy Charges”) and maximum level of energy consumed during a time period (Demand Charges). SolarCity, an energy supplier in the US is providing battery storage services to industrial and commercial consumers. Storage provides power not only when the grid is down but also when energy consumption goes beyond a limit. This helps in reducing demand charges charged by the utility.

Most of the energy storage projects in India are Pumped Hydro-Power based at hydro power stations. Few solar thermal storage and battery-based projects have been developed over the past few years. In the near future, other energy storage technologies are expected to pick up. 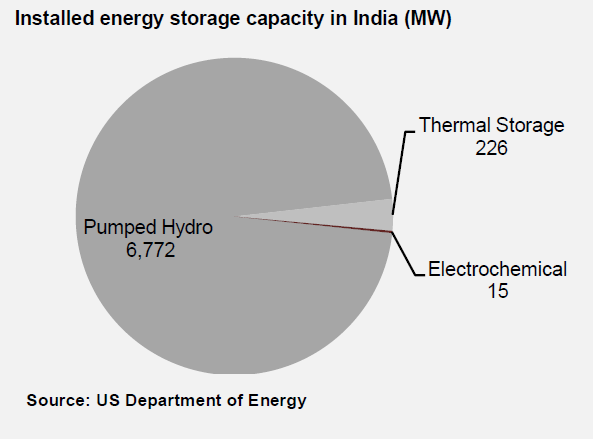 The MNRE has invited expressions of interest for energy storage projects. The Government is looking at the following four application areas –

This growth is expected to be driven by more infusion of infirm renewable energy, development of micro grids for rural electrification and policy driven initiatives such as MNRE’s recent expression of interest for setting up demonstration Energy Storage projects, National Solar Mission and National Electric Mobility Mission.

Reference: This article is based on monthly newsletter of Agneya Carbon Ventures Private Limited.