(This is a series of articles on the various technologies that can be employed to trap the sun’s energy. This is the 4th part of the series.) 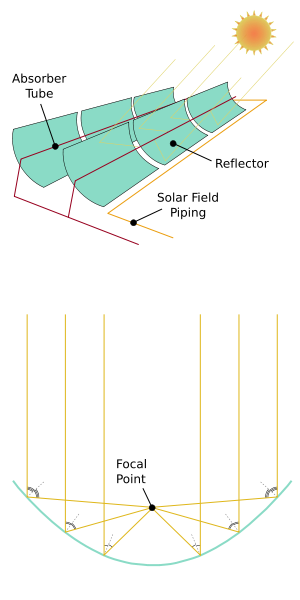 A parabolic trough employs parabolic mirrors that act as collectors (can be coated silver or polished for more efficiency). A Dewar tube runs along its focal length. In case of a parabola, incoming rays which are parallel (sun’s rays arriving are nearly parallel) will be reflected always to the focus regardless of where they arrive on the dish. It tracks the sun’s movement from east to west. The number of parabolic troughs can be varied according to the system’s requirements.

Since 2009, metal sheets have replaced glass in the parabolic troughs. Silver polymer is employed for constructing it. Advantage is in the form of much less weight and less cost. The efficiency is not compromised upon.

The sun’s rays concentrate on the focus of the parabola which has a Dewar tube running along its length. It can contain water, oil, or as in modern technology available nowadays- molten salt. The heat generated is used to produce steam which generates a turbine producing electricity.  The fluid is passed again after heat exchange and the process is repeated.Efficiency is around 15%. Thermal storage insulated tanks can be used for storage of molten salt for use at night time. The next challenge is to increase night time operations to twelve hours from the current six hours to provide all round electricity.

Since the sun moves through the tropics, the entire solar assembly should also track the sun otherwise efficiency will be severely compromised. This was done manually earlier but nowadays, motors and computer simulation models are used that automatically calibrate for the position change of the sun.