Philippine’s transport sector contributes 30% of all pollution in the country and approximately 80% of air pollution in Metro Manila.  In this regards president of Philippine has transferred 20 ADB funded electric tricycles to the City of Mandaluyong on 13th April 2011. This is the first step towards sustainable and energy efficient transport model for the country. These electric vehicles are part of an ADB-funded project to introduce alternatives for the conventional transport system by using energy-efficient transportation technology. ADB has long promotion plans for EV technology and regarding this ADB officials are in touch with the government. Other development partners with local government will also contribute to scale up this project in Manila and other urban areas as early as 2012. 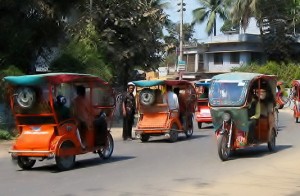 Presently more than 3.5 million fossil fuel based motorized tricycles are operating in Philippines due to its popularity as a low-cost public transport for short distances. All vehicles which run on fossil fuel together produce more than 10 million tons of CO2 and consume around $5 billion of imported fuel each year. Estimated potential of this project is as follows- It can conserve the country’s foreign exchange by huge numbers e.g. every 20,000 electric tricycles will save 100,000 litters of foreign fuel imports each day thus saving the country about $35 million annually

All the E-tricycles will be manufactured at Philippines using indigenous technology. Highly efficient lithium ion batteries are in use for the electric tricycles. These types of batteries have 2000 of charge-discharge cycle and replacement time is more than two years. Initially ADB will establish four charging stations at Mandaluyong city. These charging stations have the capability to charge e-tricycles’ batteries up to 50% capacity in less than 30 minutes. In addition, one of the four charging stations will be running on solar energy.

As electric tricycles use electricity to power themselves instead of fossil fuel, this results in a very low carbon footprint per kilometre of travel done by them. Carbon footprint of these vehicles is estimated to be less than one quarter of petroleum-fuelled tricycles