Be it the Exxon-Valdez oil spill of 1989 or the more recent oil spill in Gulf of Mexico known as the Deepwater Horizon oil spill that began on 20th April in 2010, both spewed into the ocean tonnes of oil that greatly hampered the wildlife and their already vulnerable habitat. The volunteers who stepped into the movement of saving the wildlife endangered by the oil spill were also made to confront the toxic oil, hampering their health too. The method involved to deal with this huge disaster was not only harmful to human life but also highly time consuming. It was then that microbes as cleansers of the environment surfaced as a viable option that not only helped in cleansing the environment off the toxins but also broke down the toxins into less harmful materials.

The breaking down or metabolization of toxic chemicals by living material like bacteria, fungi, archae, etc. into harmless matter is known as bioremediation. Plants and animals too can be used as bioremediators but microbes are comparatively better suited and easier to deal with the problem in hand. Microbes are naturally existent and can break down these complex compounds as a source of energy and render them harmless rather than alternate expensive methods such as the collection and storage of the oil spilled. Different species of these microbes break down these hydrocarbons finally releasing carbon dioxide and water and efficiently cleanse the water body off the oil in an acceptable time frame.

The U.S. Geological Survey had a successful bioremediation project in Hanahan in South Carolina to deal with the problem of the leakage of 80,000 gallons of jet fuel into the permeable sandy soil in 1975 that had leached toxins like benzene into the ground water and greatly polluted the vertical profile of the ground water harming the people in its close vicinity. The U.S. Geological Survey, in their studies had shown that naturally present microbes in the soil effectively biotransformed the fuel derived toxins into carbon dioxide and put this theory into action in 1992. By the end of 1993, the polluted ground water that had reached the residential area over the years was reduced by 75% and the then 5000 parts per billion of toluene concentration reduced to becoming undetectable. It was then that it was realized that bioremediation by these tiny microbes was not only effective but also an important aspect in cleansing the environment off the pollutants. The optimal environmental requirements for effective oil degradation can be tabulated as below –

Bioremediation is not just efficient in removing hydrocarbons from the oil spillage but also heavy metals. A study revealed that the Enterobacter sp. That could resist 275 mg Copper/litre, Stenotrophomonas sp. that was able to resist 320 mg Cadmium/litre, Comamonas sp. which resisted 140 mg cobalt/litre and Ochrobactrum sp. that resisted 29 mg Chromium/litre was able to reduce heavy metal contamination in the effluent and bring down the organic load too and hence can be used effectively in treating industrial wastes with high heavy metal stress. Heavy metals pose great challenge to both human health and environment as they often cause many diseases and gets accumulated and biomagnified in our food chains. Bioremediation hence seems an effective solution to the problem of heavy metal contamination. The microbes like Deinococcus radiodurans too have been found effective in absorbing aromatic hydrocarbon like toluene and heavy metals like mercury. Pseudomonas, Sphingomonas , Alcaligenes, Mycobacterium and Rhodococcus are some microbes that have been found to have degradative capacity against pesticides and hydrocarbons (both polyaromatic compounds and alkanes). The biodegradation process can take place both in the presence and absence of oxygen releasing carbon dioxide and water, depending on which the following mechanism is followed and the end products are slightly varied. 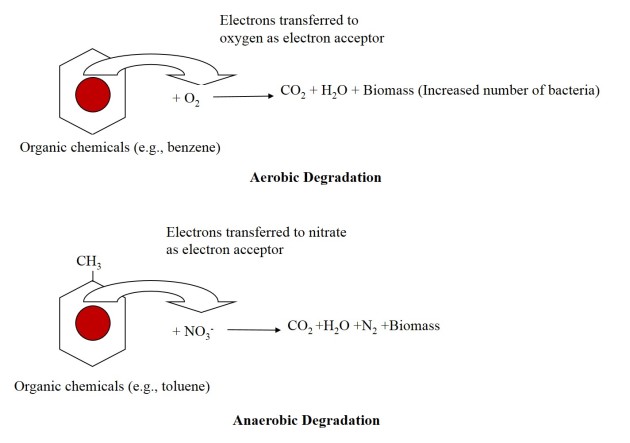 The process of bioremediation can be carried out either In-situ, that is at the site itself with minimal disturbance or applied on the contaminated water or soil which has been pumped or excavated out from the site which is known as Ex-situ. While In-situ is cost efficient and causes minimal disruption at the contamination site to be bioremediated, it also faces the problem of seasonal variation in the microbial activity and difficulty in addition of additives like oxygen, surfactants and nutrients. On the other hand, Ex-situ bioremediation is a controlled process and hence can provide faster results providing more uniformity in the treatment. However, it requires excavation increasing the cost involved and also increases the risk involved with the handling of the contaminated sample. Hence, both the strategies have their own advantages and disadvantages and can be summarized as below.

Bioremediation is a completely safe process which mainly depends on naturally existing microbes of the groundwater and soil for metabolizing the waste, moreover the ones added in the bioaugmentation process die off once their purpose is served also the chemicals and nutrients added to stimulate the process of bioremediation are completely safe and pose no danger to human health. Bioremediation is a natural cleanup process and does not require much investments and equipments also. In case of In-situ treatment little or no disturbance is done to the soil, groundwater, etc. in the area of contamination and hence is easy to carry out. Bioremediation does have a lot of disadvantages like, it takes long to remediate the contamination, depends on the climatic factors but it is aesthetically pleasing and environmentally safe and reduces the amount of end waste to be dealt with by means of landfilling. Bioremediation is a recent technology and much is needed to be studied about the microbes, their behavior and factors affecting them before the project is applied beyond the lab scale so that the safety and efficacy of the process is considerably convincing and the desired results may be reaped at the end of the project.