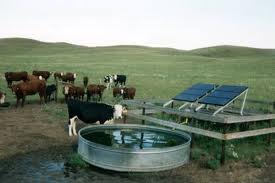 Chief Minister Ashok Gehlot has announced a decision to install 10,000 solar pumps across the State during the current financial year.

Planning Commission’s Member (energy) B. K. Chaturvedi reviewed the scheme’s progress at a meeting in New Delhi recently. State Principal Secretary (Horticulture) Dinesh Kumar Goyal made a presentation on the environmental and economic aspects of the ambitious scheme at the meeting.

Mr. Goyal said here on Tuesday that the scheme had made a significant contribution to agricultural development in the State during the past three years. The Planning Commission had agreed to consider all proposals made by the State Government for extending the scheme and widening its scope to cover more beneficiaries.

Mr. Goyal said the Union Ministry of New and Renewable Energy was also considering a proposal, following the scheme’s success in Rajasthan, for installing as many as 17,500 solar pumps across the country, 65 per cent of which would be in the State. “The dry climate and availability of ample sunlight are major factors responsible for encouraging results in Rajasthan,” he said.

The advantage is that no fuel or electricity is required, which in turn results in lower costs of operation. Under Phase II of JNNSM, the target for deployment of 25000 solar pumps by the end of FY 2017 has been envisaged.