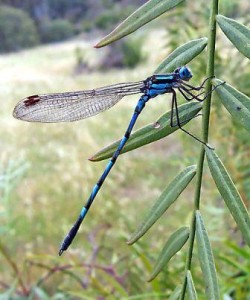 A rare odonate species was located for the first time in the southern parts of Western Ghats on 5 January 2014.

The entire range of hills from Tapi to Kanyakumari with a length of around 1500km and approx. area of 1.6 lakh sq.kms is known as the Western Ghats. The actual area under forests is around 30%.

Western Ghats is also known by other names such as Sahyadri in Maharashtra, Nilgiri in Karnataka and Tamil Nadu and Annamalai and Cardamom hills in Kerala.

The region is highly rich in biodiversity and is one of the biodiversity hot spots of India. A new frog species was discovered in Western Ghats, Nasikabactrachus sahyadrensis

Odonates are mainly aquatic insect group and their part of lifecycle completed through aquatic environment.  All rivers with the riparian zones, perennial streams and meadows form key areas of the reserve and provide best opportunity to the odonates to flourish.