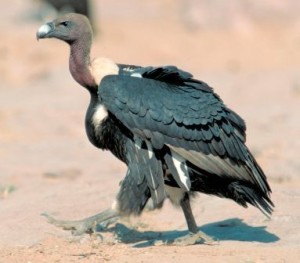 Saving Asia’s Vultures from Extinction (SAVE) wants to release up to 25 birds into the 30000 kilometer square safe zone. The captive-bred birds will be released into the wild by 2016 under the project would. The project has been planned following the devastation in the populations due to vetting of drugs named Diclofenac on cattle.

The veterinary drug Diclofenac that is used in vetting the cattle has been identified as a reason that is causing the sharp deep in the numbers of vultures. The drug has been banned in India. Diclofenac is toxic for any and all vultures that feed on the carcass of recently treated cattle. SAVE in its study says that the version for human use is being illegally given to the cattle.

The study says that three species of the South Asian Vultures are critically threatened for extinction in the coming future. During 1980s the Oriental white-blacked vultures that are considered to be one of the most common large bird preys in the world were present in abundance in India. Slowly the number of these vultures has decreased critically and now there are less than 1000 these vultures surviving. This bird’s population has gone down by almost 99.9 percent.

Other two species, whose population has decreased sharply, although no link has been established for the cause of their deaths, the two species are

In 2006, Diclofenac was banned from being used to vet and farmers. This decision was taken following its effect on the vultures. In 2004 it was established after the study on the sick birds in the wild that the decrease of the population of vultures is caused due to the anti-inflammatory drug being used to reduce swelling in injured or diseased animals.

The study suggested that the vultures who were feeding on the carcasses of the animals vetted with Diclofenac were dying due to acute kidney failure or lost their ability to reproduce.

SAVE stands for Saving Asia’s Vultures from Extinction and it is a consortium of like-minded, regional and international organisations and has been created to oversee and co-ordinate conservation, campaigning and fundraising activities to help the plight of south Asia’s vultures.

SAVE is currently engaged in advocacy to more effectively remove diclofenac from veterinary use, creation of Vulture Safe Zones and formulation of breeding Centres and release programmes.