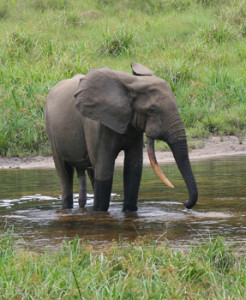 The Supreme Court has asked the Union Ministry of Environment and Forests (MoEF) and Ministry of Railways to evolve steps to prevent death of elephants on rail tracks.

The SC bench of Justice Radhakrishnan and Justice Vikramjit Sen asked both the ministries to study the measures adopted last year by Karnataka government that helped in minimising the casualty of tuskers.

The apex court also turned down the plea of the Ministry of Railways to modify its order of 10 December 2013. In its December 2013 order SC had asked the Ministry of Railways to take steps to reduce speed of trains while travelling through forests inhabited by elephants; to change rail routes passing through forests; and to discontinue the movement of goods trains at night in certain sections where such accidents have been witnessed.

The Ministry of Railways had sought modification of court’s direction to divert fast-moving and night trains on Siliguri- Falakata section and for discontinuing the movement of goods trains at night between Siliguri and Alipurduar in West Bengal.

The bench said that the MoEF and Railways will examine all these aspects and submit their detailed suggestions and steps they are going to take so that such untoward incident would not happen in future and wildlife could be protected.

The SC gave its judgement after a Public Interest Litigation (PIL) was filed by Shakti Prasad Nayak. In his PIL he sought direction for taking appropriate steps to prevent killings of elephants hit by fast-moving trains passing through their habitats and also by electrocution. He has also sought the framing of guidelines including strategies to protect elephants from being victims of such incidents.

The Karnataka Elephant Task Force was headed by Prof. Raman Sukumar which submitted its Report to the Karnataka High Court in September 2012. The main recommendations of the Task Force are as follows-

Three zones are proposed for this purpose, each with a different set of conservation objectives and goals. These zones are Elephant Conservation Zone, Elephant-human Co-existence Zone, and Elephant Removal Zone.

Establish a Karnataka Elephant Expert Group, within the State Wildlife Board, with a broad mandate to plan, advise, and assist in elephant conservation and management in the state.