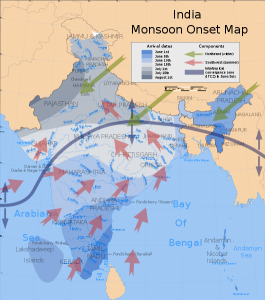 Researchers from Stanford that includes two Indian origin scientists have warned of changes in the patterns of extreme wet and dry events during monsoon that will be increasing the risk of drought and flood in central India.

The study pointed out that the intensity of extremely wet and dry spells have been increasing in recent decades.

“We are looking at rainfall extremes that only occur at most a few times a year, but can have very large impact,” said senior author Noah Diffenbaugh, senior fellow at the Stanford Woods Institute for the Environment.

Wet and dry spells were defined as three or more consecutive days of extremely high or low rainfall, respectively.

Such “spatial-temporal dependencies” are particularly important when studying temperature, rainfall and other geophysical phenomena that can change over a daily scale, said Bala Rajaratnam, assistant professor of statistics and of environmental Earth system science.

The research team compared the rainfall data from the Indian Meteorological Department and other sources over a 60-year period. Statistical methods were employed to compare peak monsoon rainfall patterns during two time periods: from 1951 to 1980, and from 1981 to 2011. The team looked specifically at rainfall during the months of July and August, which is the peak of the South Asian summer monsoon. The analysis focused on central India, which is the core of the monsoon region and has high population densities.

The study was published in the journal Nature Climate Change.