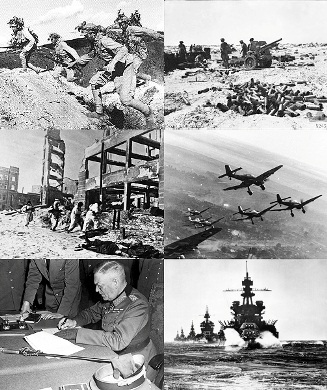 Man endowed with superior mental faculties is perhaps the most quarrelsome of all creatures. We kill each other; we cannot be friendly with out neighbours and show utter disdain to those who are weak and all this in spite of the fact that we are perhaps some of the smartest species on the planet. Over the centuries, philosophers have perhaps come up with umpteen reasons for not waging war so I am not getting into that. Let me examine it from another point of view. Let us see the environmental cost of the war. Some prefer calling any war an Eco War which perhaps is valid because a war inevitably causes immense destruction of the environment.

I remember as a child waiting in my school library for the absentee librarian to condescend and issue me books, I stumbled upon a very moving essay by Oscar Wilde. Written while he was in jail, it is perhaps the best piece ever written on spirituality, religion, morality and on life in general. I am quoting a few lines here as it brings out the importance of nature…

“Society, as we have constituted it, will have no place for me, has none to offer; but Nature, whose sweet rains fall on unjust and just alike, will have clefts in the rocks where I may hide, and secret valleys in whose silence I may weep undisturbed. She will hang the night with stars so that I may walk abroad in the darkness without stumbling, and send the wind over my footprints so that none may track me to my hurt: she will cleanse me in great waters, and with bitter herbs make me whole.” (1)

Modern day wars no doubt inflict a great misery on man but also simultaneously cause a great and irreparable damage of the environment. Forests are wiped out, animal species become extinct; water resources become depleted and polluted. Nuclear weapons usage which has become a very realistic probability can wreck havoc and accelerate global warming, ozone layer destruction. All wars no matter which side wins or looses deplete the environment a little and since nature doesn’t recognize boundaries, the entire human race gets affected by it even though we may not realize it immediately.

The UNEP which carries out post conflict environmental assessments confirms the negative impact of such wars. As always, the worst impact is on the vulnerable sections of the community who are dependent on such natural environmental resources for their livelihood.

“In addition to their tragic human toll, disasters and conflicts can destroy infrastructure, undermine human security and tear apart the fabric of sustainable development. Their impacts are disproportionately borne by the most vulnerable sectors of society, affecting livelihoods and compounding poverty.” (2)

While international and globally recognized conventions such as the Geneva Convention protect human beings, there is very little regard for the environment which undergoes the maximum destruction. Is it right to protect human beings from torture and then leave them in a destructed environment which is nothing but slow torture, ultimately both situations will kill humans. Nobody can survive in a polluted environment.

There are some instruments to protect environmental damage in the event of a conflict. Some of them are-

However, even the Geneva Convention is not able to protect soldiers and war crimes are a reality; so protecting the environment in case of an armed conflict is a distant dream. Since wars are not going to disappear in the near future and with better techniques being developed to make better weapons; to cause maximum damage, perhaps the time is ripe for a global convention for environmental protection. A convention that specifically restricts biological weapons being used in the event of a war; protects the environment and places restrictions on the choice and mode of weapons. A regulated war as it were, which restricts environmental damage and imposes cost on parties for repair and rebuilding the ecosystem services. This is significant because some of the damage may be irreversible and since we can’t just wipe the slate clean and live on another planet after the war is over, we might as well undertake steps to protect our environment, the air we breathe, the water we drink and the food we eat.