It is important to know about the benefits and risks of a carbon credit project considering the uncertainty of carbon markets. Identifying business risks associated with a carbon credit project (Green House Gas emission reduction project) allows a project developer to realize the projected financial outcome in the future and also offer insights on risks related to regulatory and financial aspects.

Background: The growing concern about climate change among world leaders resulted in an international treaty-United Nations Framework Convention on Climate Change (UNFCCC). Kyoto protocol is an international agreement under the UNFCCC with legally binding targets for 37 industrialized countries to reduce and limit their GHG emissions by 5.2 % below of their emissions on 1990 level.  Kyoto protocol was adopted in 1997 and till date there are 193 countries that have committed to limiting their greenhouse gas emissions by working together.

Emissions trading or cap-and-trade is a market-based approach used to control Green House Gas (GHG) emissions by providing financial incentives to the GHG emission reduction projects. Emission reduction projects like the use of renewable energy for e.g. wind, biomass, small hydro and solar energy projects; waste management that reduces methane emissions, reforestation projects, etc can be registered under this market based mechanism to earn carbon credits. Carbon finance, made available for such projects which are registered under available carbon credit mechanism, facilitates the financial support through carbon credits for the reduction of greenhouse gas emissions to the project developer in developing countries.

The Clean Development Mechanism is one of the instruments created under the Kyoto Protocol to facilitate carbon trading. It is the first of the flexible mechanisms governed by a regulatory body – the CDM Executive Board under the UNFCCC. Reducing emissions within their own boundaries is costlier for developed countries(Country which is included in Annex 1 of the Kyoto protocol)  as compared to doing the same in developing country (Non-annex 1 country) like India, China, etc. CDM allows a developed country with emission-reduction targets to implement an emission reduction/sink project in developing countries. These projects result into quantified and verified emission reductions and can claim Certified Emission Reductions (CERs) popularly known as Carbon Credits.  Each CER is equivalent to one tonne of CO2e (equivalent) and can be traded in the International Market.

What drives the price of a CER?

CER pricing is market driven and dependent on the European market. European countries have around 80% share in CER trading and hence any market based crisis in this region affects the price of the CER.  For the past one and a half year, the price of carbon credits has dropped considerably. The following graph shows the price of CERs over the periods of last 18 months; 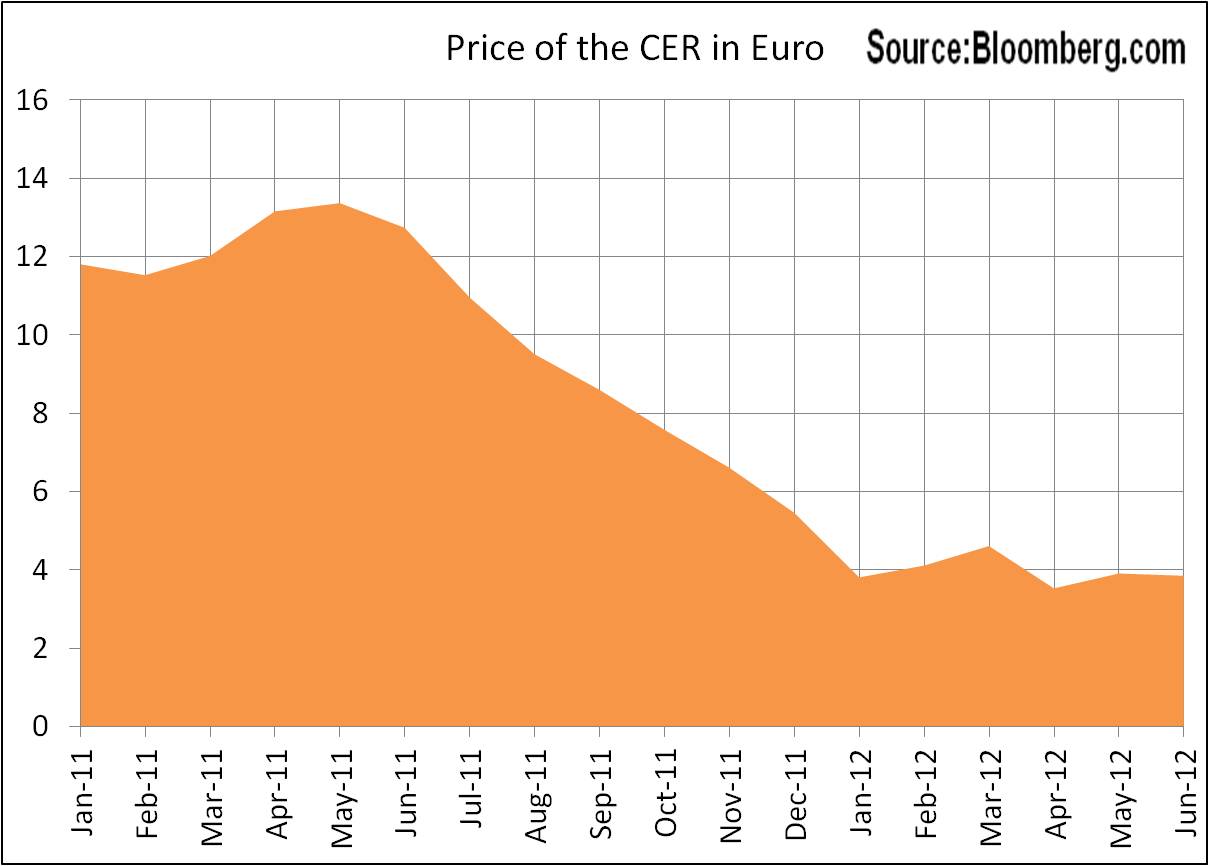 As an outcome of Durban conference, developed countries have agreed to legally binding GHG emission reduction targets subject to the conditions that developing countries like India and China also take GHG emission cuts. However, both India and China among other developing countries have not given their consent to such a demand. Therefore, the future of Kyoto Protocol which governs the CDM mechanism remains uncertain till the participating countries to the climate change conference come to a consensus.

European Union (EU) and others are major buyers of carbon credits originating from India and other developing countries. If they don’t extend the second commitment period starting from Jan 2013, project developers from developing countries like India will have less number of buyers for the carbon credits. This will result into less or no revenue from a CDM project activity. All in all, it will result in a diminished demand for Carbon Credits which is driving the high uncertainties in the CDM market.

UNFCCC has specified that mechanism to register an emission reduction project and issuance of carbon credits would continue post 2012 under the CDM. However, in the absence of Kyoto Protocol’s binding GHG emission reduction targets, there would be no or very few buyers of CERs post 2012.  CDM project can be registered post 2012 but uncertainty over buyers of carbon credits would linger on.

Overall, the CDM mechanism and its genesis, Kyoto Protocol, are facing uncertainty over their operational continuity.  Due to which, the market sentiments are damped resulting in lower prices of CERs. Including these risks, the gestation period of CDM project has increased in recent time. Considering these risks, uncertainty and upfront cost involved with CDM project development, it’s better not to proceed with CDM project development on an immediate basis. However, a prospective project developer can fill the CDM prior consideration form to the UNFCCC and hope for a positive outcome of the Qatar climate change conference in the coming month of Dec 2012.

Note: This is the author’s view on the current scenario of the carbon market based on recent information and analysis. It is not linked with economic benefits of any industry or organization.