Monsoon is a season of joy for many because monsoons provide relief from the sultry hot summer and lead the way for greenery all around us. Monsoons are very important for farmers as well as this is the season which determines how successful a crop will be. Let’s find out more about the monsoons in India.

The Indian Monsoon is perhaps the biggest phenomenon in the Indian sphere of life; discussions on the event are perhaps rivalled by discussions on Indian Politics only. Besides its vital impact on the country’s agricultural productivity; it also has immense influence on trade thus affecting the economy, not to mention the influence on direct and indirect livelihood of more than one billion people.

Quite simply, it is nothing but a sea breeze albeit on a very large scale. The word may have originated from Hindi mausam (weather) or from Arabic mawsam (season). The importance of the monsoon in the context of the Indian economy is colossal.

Cause of the Monsoon- 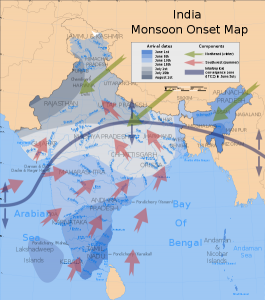 Monsoon is triggered by the heating of the land; the earth is tilted in relation to the sun. The sun’s rays heat up the air and the cooler air over water bodies rushes over. So Monsoon is generated due to the difference in the temperatures between Land and Seas. Since the land is much more in the northern hemisphere, the Monsoon is more prevalent here. Remember that due to the earth’s tilt, the sun’s rays will be more direct over the northern hemisphere in summers. During the winter, a winter monsoon occurs as a result of the opposite phenomenon (in Australia, Sri Lanka and East Indian coast).

The IMD is the supreme organization involved in monsoon forecasting for the country along with other supporting organizations including the Indian Institute of Tropical Meteorology (IITM- Pune), Indian Institute of Science (IISc), Bangalore; Space Applications Centre (SAC- Ahmadabad), National Aerospace Laboratories (NAL- Bangalore), Centre for Mathematical Modelling and Computer Simulation (CMMACS- Bangalore), and the National Centre for Medium Range Weather Forecasting (NCMRWF- Noida). IMD issues forecasts for the whole country and separate forecast for the four geographical regions of India.

The prediction models being used by India are statistical ones meaning they try and estimate the amount of rainfall based on historic estimates. It basically uses a determined atmospheric variable data set subjected to statistical correlation to the total rainfall the country will receive in the Monsoon season (June- September). (Please visit IMD web site for further details)

Forecast for the 2011 South-west monsoon rainfall-

No update of the June 2011 forecast was issued at the time of this post.

The Indian monsoon shows variability and thus there is a need to constantly weed out existing models and develop new models. The ensemble model can be useful as it uses data from forecast available from different models to develop the final forecast. A dynamic prediction system has been implemented under collaboration between IMD and IISC (Indian Institute of Science) to bring more advancement in the forecasting system.

Normal rainfall maps of India: (Click on the map to enlarge)