Water hyacinth and need for its removal 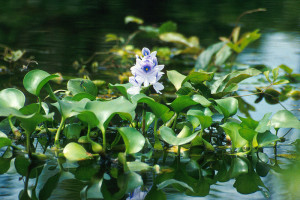 Water hyacinth (Eichhornia crassipes) is one of the most intransigent weeds of the world. It has successfully resisted all attempts of eradicating it by chemical, biological, mechanical or hybrid means. Wherever water hyacinth is not controlled, it rapidly covers all the water-bodies and surrounding marshy areas. At an average annual productivity of 50 dry (ash-free) tonnes per hectare per year, water hyacinth is one of the most productive plants in the world. Such colonization of wetlands leads to rapid decline of the quantity and the quality of water (DO depletion and aging of water bodies) through addition of dead biomass. It also affects aquatic ecosystems health and biodiversity of the water bodies.

Water hyacinth is used in treating biodegradable wastewaters. Also, volatile fatty acids (VFAs) has been extracted which can be used as feed supplement in slurry biogas digesters and solid-feed digesters to generate fuels.

Need for other technology for disposing water hyacinth

But the quantity of the aquatic weed that can be utilized in above methods is very low. Even if these options are gainful, the problem of disposal of ‘spent’ weed (left over water hyacinth biomass) still remains. There is a need of novel technology (or combination of technologies), which is ecologically sound and economically viable, to solve the problem of aquatic weed management along with treatment of sewage.

It is estimated that in cities and rural areas of India many million tonnes of organic waste is generated annually which is either burned or land filled. Also, organic contamination necessitates sewage treatment prior to disposal into natural water bodies. Otherwise, the water bodies can be eutrophicated and polluted. The conventional treatment technologies are not that successful, at least in developing countries. Use of aquatic plants, like water hyacinth, in the sewage treatment, apparently, holds the key for the problem.

Mushroom (which falls under the category of healthy, medicinal organic foods) is one of the most delicious food ingredients. Also, demand for organic and healthy foods is increasing world over due to the change in consumer’s preference. So, spent water hyacinth (water hyacinth biomass after the sewage treatment) can be used as substrate for growing mushrooms.

Mushroom production results in generation of large quantities of spent mushroom compost (spent substrate). 1 kg mushroom production results in the generation of about 5 kg spent mushroom compost (SMC). So, when water hyacinth biomass is used as substrate for mushroom production, disposal of spent biomass will continue to remain a haunting problem. In the past decades, potential of earthworms for breaking down organic waste has been explored in depth and many large scale vermicomposting have been developed all over the world with varying success. It is a viable, cost-effective and rapid technique for the efficient management of the spent mushroom compost. Vermicompost is considered as an excellent product since it is homogenous and tends to hold more nutrients over a longer period, without impacting the environment.

Water hyacinth biomass (harvested from water bodies after treatment of sewage), can be used as substrate in mushroom culturing and the spent water hyacinth biomass can be transformed into compost through vermicomposting route and used in agricultural fields to close the nutrient circulation loop.