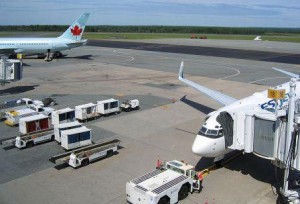 The significant role of airports on regional economy has been prominently recognised by many researches; airports bring significant social benefits and in many cases they are thought to be the single largest generator of economic activity in the regions they serve. However, transport infrastructures like airports have considerable effect on city’s urban development and have negative impacts on the environment. Many reports show that the contribution of airports to environmental disturbance at a local and global scale is significant. Key environmental impacts may result from airport operations, airline operations, airport access or various construction projects in the airport landside. 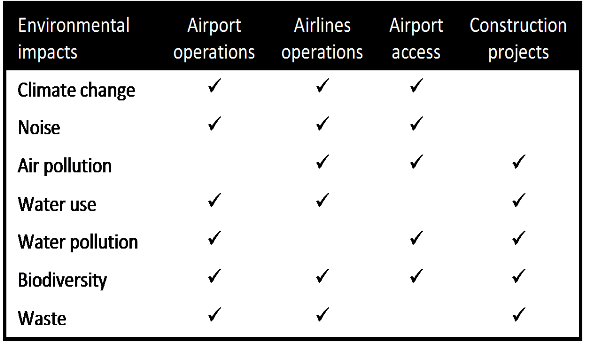 Within the global context, airports have significant impact on the global environment in terms of climate change. At a local level, even though noise seems to be the main concern over the last 20 years, air emissions, resources (energy and water) availability, waste and waste water management, ecosystems and land use planning constitute issues that are directly linked to local communities’ tolerance.

Worldwide international aviation is considered one of the most growing sources of greenhouse gas emissions. Even though aircraft emissions are not included in Kyoto protocol, emissions that are directly controlled by airport operators are ground-based and therefore are subject to national inventories and targets.

The most important measures that airports apply in order to reduce their carbon footprint or to manage emissions that are under their direct control include improvements in energy efficiency and conservation, ground fleet conversions, low emission power generation plants on site or renewable energy supplies. In some cases geothermal, hydropower, solar or wind power is used to cover a significant proportion of energy needs. In other cases many airports focus their efforts on achieving carbon neutral operations by offsetting carbon emissions that cannot eliminate. It is worth mentioning that there are examples of airports that become carbon accredited to ensure efficient operations, to reduce costs, to raise airport’s profile and credibility and to secure a license to grow.

Even though many actions have been applied to mitigate climate change impact these seem to focus on reducing carbon emissions only. This is surprisingly considering that global warming results in alteration in the hydrological cycle that could result in changes in the precipitation patterns and run-offs that could affect water availability and demand. And it is a fact that many areas in Europe already have to deal with severe water stress. Consequently, water availability could become a major barrier for growth for airports located in hot destinations that are affected by climate changes.

Water use is generally considered as a constraining growth factor for many airports. The most representative example is the case of Heathrow airport, in UK. A detailed analysis of the applied environmental strategies showed that, in most of the cases, the applied practices to reduce water use depend on the location of the airport. In order to increase water efficiency airports may install various leak detection systems, install water reduction devices and implement water recycling operations to reduce the demand of potable water.

In addition to climate change impact airports present significant consequences on the surrounding area as they are a major source of noise and waste. Undoubtedly, if you have stayed for a short-time near an airport you should be annoyed by the noise coming from aircrafts take-off and landing activities. Even though certain measures are implemented by large airports to reduce noise levels, like noise monitoring systems, operating restrictions and limits, air traffic management, anti-noise barriers, home insulation etc. there are many airports around the world thatthreaten peoples’ health.

Waste water and effluents is another issue that needs proper management to avoid polluting the surroundings of an airport and posing harm to employees, customers, local communities and the environment. Airport water run-offs are considered a major source of pollution as they are characterised by high level of chemicals and toxic substances, resulting from aircraft and airfield de-icing and anti-icing, fuel spillages, firefighting foam, chemicals and oils from aircraft and vehicle maintenance, detergents used in aircraft and vehicle cleaning etc. The most common applied measures include wastewater and sewage plants, drainage systems, surface and ground water quality monitoring, sampling at discharge points, oil, hydrocarbon and grease separator systems, use of biologically degraded de-icing and anti-icing agents etc.

In addition to waste water and air emissions airport activities involve the production of significant amounts of solid waste that needs to be managed. The waste generation mainly includes solid urban waste, non-hazardous waste and special hazardous waste from terminal, airfield operations, maintenance activities, and aircraft catering. Airports often carry out various waste initiatives to reduce waste or to separate wasteat source. In addition, collection and safe disposal of hazardous waste is taking place in accordance to the relevant regulations.

Asimina Voskaki has a background in earth sciences (BSc) and she extended her knowledge in environmental planning (MSc) and environmental sustainability assessment for airports (MREs). She has experience in consulting on geo-environmental issues and she was leader consultant in urban planning projects, assessing the suitability of geo-environment. In addition she was involved in sustainable mobility and transportation projects as an environmental consultant. She is an expert on climate change issues and participates in related policy development. She is a co-author on various publications on the area of public perception on climate change and airport sustainable development.